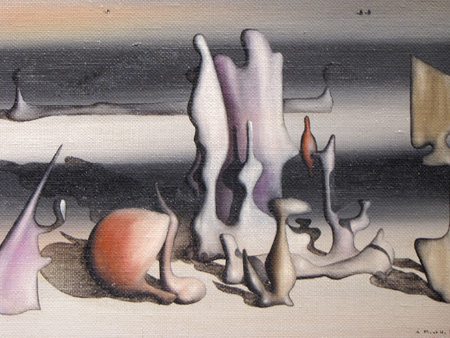 In the late 1940s, the critic Clement Greenberg scorned Max Ernst’s Arizona-desert “picture postcard” paintings, prompting the Surrealist to dump an ashtray on his head; “Pope Clement” countered by punching Ernst in the face. All of this was to the ironic delight of that critic of political violence, Hannah Arendt, who celebrated the American energy and manly forthrightness in action. (I am not making this up.) This splendidly ridiculous fracas symbolizes America’s love-hate relationship with Surrealism.

Because the supposedly “homegrown” American style of Abstract Expressionism had grown from Surrealist roots  — i.e., experimentation with materials while trusting in chance and the unconscious — a kind of oedipal killing of the Old-Europe fathers was needed as America flexed its postwar clout. Surrealism was dismissed as retrograde figuration imbued with “literary” narratives: shopworn elitism. That dismissive attitude somehow survives, unexamined, even in today’s pluralistic art world. As recently as a few years ago, the art critic for The New Yorker, Peter Schjeldahl, belittled Surrealist influence in American culture, again, on the occasion of a retrospective at the Museum of Modern Art, limiting it to ... advertising imagery. (Had he forgotten the kidney-shaped coffee tables of the 1950s? Is there an ashtray available?)

A beautifully illustrated catalogue is available, featuring short biographies and the witty and rhapsodic quotations one would expect, along with gracefully written essays by Rowland Weinstein and Mary Ann Caws. It should be noted that there are some discrepancies: some of the works illustrated in the catalogue are not to be seen in the show, while other works were added too late publication, notably a 1941 Ernst decalcomania (impasto paint pressed into geologic/botanical ramifications) forest painting, “Convulvulus! Convulvulus!” with its erotic pun reflecting Surrealism’s love of  “convulsive” beauty, and a 1966 untitled Dorothea Tanning painting of pink, ecstatic floating lady cherubs. Incidentally, Tanning, who was married to Ernst, and these days “breathes words [writing poetry], as well as air, and looks at her paintings with amazement,” celebrated her hundred-and-first birthday recently.

There are a number of highights in this sprawling and wide ranging exhibition. Groups of hybrid dream creatures populate Carrington’s ritualistic “Evening Conference (1949).” Donati’s painterly creature-scapes, “Roi d’éclair” (1945) and “Menagerie” (1946) and his mixed-media “Study for Collage” (1945), are reminiscent of early Tanguy but for its flattened space and colorful palette. Tanguy himself is represented by the beautiful and enigmatic “Second Message III" (1930) and “Le Col de L’Hirondelle” (1934) with mineral and bone forms sit or float in a crystalline, transparent medium, casting long shadows on metallic plains stretching to horizonless infinity.

Depopulated alien landscapes or skyscapes dominated by mysterious forces are depicted with linear precision in Jimmy Ernst’s crystalline and totemic “Move On Up a Little Higher” (1947), “Drum Improvisation (1948) and “The Window” (1949). Matta’s landscapes or skyscapes, represented here in “Black Mirror” (1947), “Horror is Not Truth” (1948) and “Composiition” (1950), have the same dreamlike feeling, but they’re painted more gesturally and expressionistically, expressing cosmic power, if not violence.

Don’t overlook Kamrowski’s dynamic, colorful semi-abstractions depicting figures in landscapes transformed into bones, flames and foliage, like “Sycorax” (1939) or “Limitations of Indebtedness to Nature” (1942), or his nature-themed collages, “Italian Calendar” (1943-44) and “Unnatural History” (1943). Dominguez’s “Les Deux Voyantes (1945)” and “Aterlier (1952)” is cubist surrealism clearly influenced by Picasso, but more somber and mysterious. Fini’s feral, feline woman in “L’Entracte de l’Apothéose (1938-9) is a Carrington-ish scene of a strangely posed nude young woman surrounded by a trio of gesticulating crones and animated wigs, two depictions of women in menacing batlike corsets (thought to be portraits of herself and Méret Oppenheim), and an elegantly provocative related sculpture, “Corset Chair” (1939).

A collaboration between Kamrowski, Baziotes and Jackson Pollock from 1940-41 is a noteworthy novelty. Another collaboration, Donati’s and Duchamp’s famous “Priere de Toucher (1947),” features a foam rubber woman’s breast collaged atop a swatch of black velvet, simulating a wardrobe malfunction, for the cover of a Paris exhibition catalogue.