Reno: Elegies to the Environment
at the Nevada Museum of Art
by Maria Porges 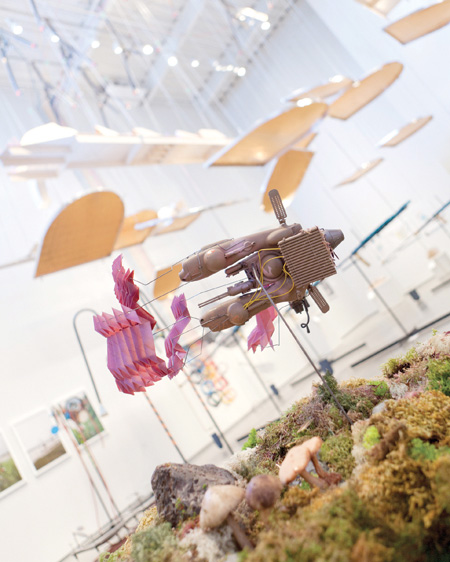 The view from the roof of the Nevada Museum of Art is a sublime justification for this unique Reno-based institution's focus on the collection and presentation of art that examines the natural, built or virtual environment. The panorama of surrounding mountains beneath a blue, blue sky exemplifies the state's quiet beauty and seemingly endless open spaces. If you turn all the way around, this scene segues into a vista of the brightly lit casinos that line Reno's main street, suggesting the complex and multivalent nature of Nevada's relationship with the freedom of its vast open spaces. Home to the Burning Man Festival, nuclear test sites and "sin city" (AKA Las Vegas), Nevada--and its extraordinary museum--both test our assumptions about what we know, or think we know, about land and time; art and the environment.

Although it has an 80-year history, the Nevada museum has only been in its present location since 2003. The unusual shape of its strikingly modern building, designed by architect Will Bruder, evokes that of rock formations in the nearby Black Rock Desert. Inside, it's a welcoming, light-filled place, its four-story-high atrium/staircase providing access to a surprising amount of exhibition space, considering the museum's relatively modest dimensions. This fall, on the occasion of its second Art + Environment Conference (the first was held in 2008), the galleries were filled with over a dozen exhibitions that simultaneously showcased both the museum's environmental mandate and the themes of the conference. Diverse in terms of their approaches to issues related to landscape, these shows were also broad ranging in terms of media, scope, and scale. They ranged from the expansive grandeur of "The Altered Landscape: Photographs of a Changing Environment," featuring the museum's signature photography collection, to the speculative and entrancing objects and images included in "Landscape Futures: Instruments, Devices and Architectural Inventions." It also included such jewels as Diana Al-Hadid's Water Thief, and an intimate grouping of sculptor Linda Fleming's maquettes in the tiny rooftop gallery.

Fleming's abstracted, latticed forms evolve out of her intense interest in the unpredictable architecture of the natural world--the patterns formed by ice cracking across a mud puddle; the shapes of distant nebulae; the patterns of wind-blown sand or water. Intricately hand-cut sculptures lined open shelves set against the room's glass walls, allowing viewers to see the intersecting planes of wood or cardboard in relationship to the eternal landscape of mountains and sky outside.

The flow of both time and water was a recurring theme of the work presented in the galleries and of the conference, a two-day event developed by the museum's Center for Art + Environment. This research center "supports the practice, study and awareness of creative interactions between people and their natural, built, and virtual environments." Its archives, founded only two years ago, already hold papers and other ephemera from more than 400 artists, making it--and the museum--a destination for visitors from all over the world.

The conference's panels and talks reflected this broad constituency. Presentations by artists, curators, scholars and even musicians reflected a shared sense of stewardship--of long-term commitments to documenting and preserving the world and its non-human inhabitants. At times, this long view was contrasted with the urgency of present issues such as environmental degradation from the exploitation of natural resources and reckless actions like weapons testing; urban sprawl and its accompanying pollution and waste; the extinction of innumerable species of plants and animals, and--above all--issues relating to water's availability, unpredictability and importance.

A number of the shows on view in the museum served as springboards for discussions and presentations relating to water and climate change, as in "Landscape Futures." Among the most compelling pieces in this group show were those by architects Mark Smout and Laura Allen, envisioning unorthodox measuring devices placed along the Severn, the longest river in England, as well as an entrancing Rube Goldberg-esque representation of ebb and flow in a London tidal basin that involved rolling balls in chutes, gangly metal arms and flapping wing-like forms covered in gold space blankets. Smout presented his work engagingly in the gallery and also spoke on a panel titled "Designing Architectures for Environmental Change."

In another presentation, artists Helen Mayer Harrison and Newton Harrison talked about "Sierra Nevada: An Adaptation," their response to climate change in the Sierra Nevada. Increasing temperatures are already affecting the plant communities there; the Harrisons provocatively propose 'reforesting' one area to accommodate global warming. Their gallery display included a forty-foot-long aerial map of the Sierras, installed on the floor.

Also on view nearby was "Fog Gardens: the Architecture of Water"--documentation of a Chilean project exploring the art and science of 'fog-harvesting,' suggesting a future source of this vital resource. More metaphorically, water was also the subject of Syrian-born American artist Diana Al-Hadid's Water Thief, a sprawling, poetic evocation of a clock that uses flow as a way of measuring time invented in 1206 by Syrian visionary mathematician Al-Jazari. Its fantastically baroque, encrusted forms reached both back into history and out towards the future, suggesting a magnificent ruin in which, impossibly, time has stopped.

Some of the photographers included in the museum's centerpiece show of landscape photography were presenters at the conference, talking about what their work was for--what pictures, like those of Edward Burtynsky, Chris Jordan or Subhankar Banarjee can accomplish. Still images, Burtynsky explained, allow us to see the details of what happens, in that we absorb them differently from moving ones. Pictures can tell the story that statistics cannot. Chris Jordan suggested that we embrace the grief we experience when confronted with his photographs of maimed dead elephants killed for their tusks, or of thousands of dead birds at Midway Island, pictured up close and individually: the victims of starvation from eating plastic debris. He described grief as a portal, presumably towards understanding and possibly action. Is looking at such horrific proof of the havoc we have wreaked effective, though? Or does it just blunt emotions?

Though some of the works in "Altered Landscapes" attempt to manipulate what we think or feel, the vast majority present the ways in which the landscape has been irrefutably altered by human activity in less didactic ways, allowing for more meaningful interpretation. A gorgeous catalogue accompanied the show, and serves as a lasting document of the exhibition, as well as embodying the museumÕs dedication to its mission, and that of the conference itself.