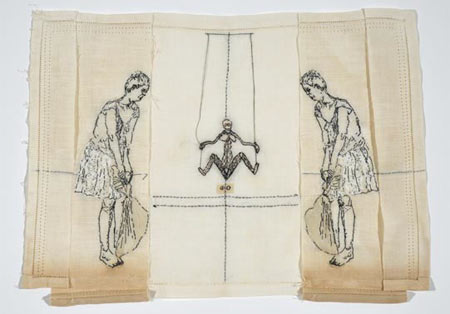 The weariness of Woman and fine intricacies of “woman’s work” - needlepoint, embroidery, and serge stitching - are the primary forces in the work of Hadar Sobol. In fact, the wilted and senescent woman is a leitmotif in this body of work. An artwork of thread and ink on vintage linen, “The Procession III” is a small figure-text triptych. Two skin-sagging women wearing droopy sackcloth dresses are stitched in black thread. They flank a Hebrew text written in ink at the center. Trudging along as though bearing someone else’s heaviness, one woman carries a wrapped bundle while the bundle-less other is in mid-step. The text at the center comes from “Weeping Susannah,” a book about a young woman, who, though socially challenged and immature, blossoms into her full self by reaching out to a visitor. Inspired by this book, Sobol has made a body of work which is not so much about midlife crisis as midlife sadness.

Midlife marks the passage into true adulthood. Sobol stages it as the “supreme moment,” or the Kairos, wherein mentee becomes mentor, follower passes over to leader, and young-adult female develops into Woman. At the same time the Greek term Kairos refers to an in-between-ness, a liminal zone where the unexpected occurs. It logically follows that Sobol’s thread-on-fabric, ink-on-paper works and paintings strike an odd sense of temporality. The off-white swatches of linen strike a sense of nostalgia, a feeling for the past, while the figures of worn-out old women look darkly out to the future, to the inevitable entropy of time ahead.

The saccharine new-age undercurrent of this work is fortunately cut by the cruel truth of aging. The women woven into Sobol’s fabric are slightly hunch-backed, toughened by the drudgeries of housework and manual labor. “Goddesses are never pregnant” is another triptych. There are three figures: two of the stock women on opposite sides, with a skeletal marionette dangling in between them. A small box with the word “GO” is stitched at the bottom.

Also inspired by the “inner voyage” of the woman in “Weeping Susannah,” “Go” is the title of a larger multi-media installation in which Sobol incorporates video into her work. A component of this work stands at the center of the gallery in the form of a vitrine containing precious linen fabric on which is woven four of the crone figures, each carrying a heavy bag. To the left, there is a faint flicker of a small screen that sits beneath the thin fabric. It is a video showing the pendulous forms of bare-breasted women. Skin-sheathed and bulbous in form, naked women slowly roil around in a cramped space. She padded the models’ bodies in the videos, having them don panty hose filled with wads of cloth. Reminiscent of Louise Bourgeois’ “Obese Bulimic Anorexic” series, Sobol makes a statement about female body dysmorphia.

It would be a stretch to call this work political. A more apt appraisal is that it was made in the spirit of a quiet, reserved, and resolved feminism. At the same time, the work functions apart from universals. It is intimate and deeply personal – about the isolation of Woman and woman, the archetypal female and the artist.