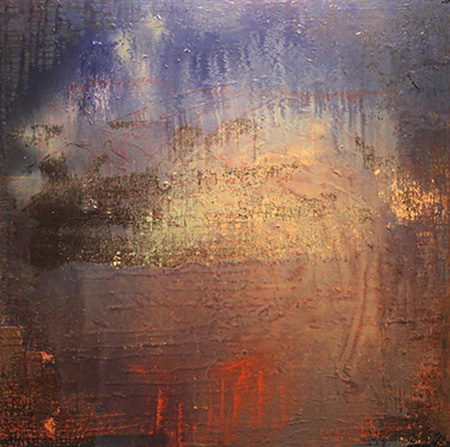 In 1935, Jorge Luis Borges wrote a review of the 1932 novel “The Approach to Al-Mu’tasim” by Bombay lawyer Mir Bahadur Ali, a kind of spiritual detective story outlining the quest of a young Indian law student for enlightenment. At the end of his arduous travels amid the lowest castes, he “perceives some mitigation in this infamy: a tenderness, an exaltation, a silence in one of the abhorrent men,” and deduces that a faint diminution of the darkness is the distant reflection of “a man from whom this clarity emanates.” The novel, as was often the case with Borges, is a fantasy, but the notion of the spiritual quest may be due for a revival after the current false messiah has faded from the scene.

Yari Ostovany, an Iranian-American painter who has lived in the Bay Area since the early 1990s, sees his practice as “a personal journey of exploration through the alchemy of paint, color, light, texture and the poetics of space.” He regards himself as an heir to the Abstract Expressionists and the artists of the Persian and Taoist/Zen traditions. Ostovany’s lush atmospheric abstractions — in a sunset palette of red, gold, ocher, purple and black — are “representation[s] of “psychic state[s]” in which “forms and marks become metaphors for a transcendent reality,” and resplendent with Lux Aeterna, “self-generating light,” a spiritual illumination from within, akin to the intuited luminous face of Borges’ Al-Mu’tasim.

The twenty oil paintings that comprise “Fragments of Poetry and Silence” were inspired by John Berger’s poem, “Dreams.” Most of the smaller works on panel were completed during this pandemic year (so productive for many artists), but a few of the larger works date back to 2016 and 2017. Ostovany’s literary/poetic/musical interests are reflected in the titles, which cite as influences Bach, Haydn (whose 1798 late mass, “Missa in Angustiis” [Mass for Troubled Times], seems urgently relevant in our quasi-Napoleonic era), T.S. Eliot, Wiliam Carlos Williams and the Sufi poets Rumi and Farid ud-din Attar. Attar’s 1177 poem, “The Conference of the Birds,” traces the tortuous quest of the birds of the world for their king, the Simorgh. At the end of the poem, purified by suffering, the thirty survivors realize that they themselves are that king: si morgh means, in Persian, literally, thirty birds. (Borges was taken with this story, too, featuring it in his omnium-gatherum “Book of Imaginary Beings.”)

As intriguing as the back stories are, they are not needed for an appreciation of the paintings, which are sumptuous orchestrations of form and color. Ostovany harmonizes thick and thin glazes, and varied applications of paint, including scumbled brushwork, sprayed paint, and rivulet curtains of thinned paint descending from all four edges. The artist creates a linear orthogonal structure stabilizing the vaporous and evanescent forms of his painterly landscapes: metaphoric clouds, sunbursts, torrents and bonfires.

“Chelleneshin 6” and “Chelleneshin 43” are medium-sized vertical-format oils on canvas with the same volcanic palette of reds, oranges and ochers kept in place by dripped-paint grids. The word in Persian means “forty days sitting,” referring to a period of forty days and nights (remember your Bible) spent in retreat and meditation. Both “Conference of the Birds 68” and “69” introduce a horizon that reads like landscapes of sand and sky — as well as inner visions of the spiritual desert overflown by Attar’s bird-pilgrims. “Peregrine 7”and “The Education of Icarus” introduce jagged black vertical streaks that suggest both the plumage of falcons (peregrine = pilgrim) and the singed wax wings of the heedless son of Daedalus. “The Alchemist IV,” “The Bodhi Tree 2” (referring to the site of the Buddha’s enlightenment), “The Oracle VII”  and “The Third Script” are other standout works. “The Third Script” references how the 13th century Sufi sage and dervish Shams-e-Tabrizi referred to himself: a script that no one can read, but which a very few may be able to discern.