What Are You Going Through?
Column
by Margaret Hawkins 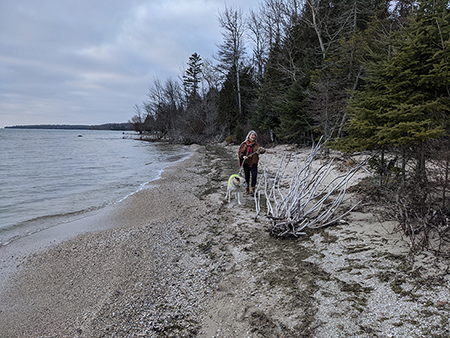 This is the title of Sigrid Nunez’s latest novel, her follow up to “The Friend,” which won a National Book Award in 2018. That exquisite book was about suicide, writing, the sticky insides of the literary world, a dog. This new book, which came out in September, too soon to have been based on the coronavirus pandemic yet with a weirdly prescient title, is about helping someone in the last stages of cancer who wants to end things on her own terms. It’s also about friendship and a cat. These books are not as unremittingly sad as they sound. They’re funny, too, and juicy with barely veiled literary gossip. They range widely in subject and tone, coolly considering issues we might not want to admit we’re thinking about.

I hate asking personal questions over Zoom. I hardly need to, though. School on Zoom is called remote teaching but the medium can be jarringly intimate. Students tell me things they never would in a normal classroom, without being asked, or they do so in emails or in their assigned writing. They’re going through a lot. They’re young — some weren’t even alive in the twentieth century — but they write about death all the time. I had them read “The Friend” on a hunch they’d understand and they voted it their favorite book of the semester. “It’s about loss,” one said, simply, in explanation.

Answer (all): Life, until you’re not.

At one of the schools where I teach I’m supposed to be getting students to write about art, but galleries and museums are closed and many students are back in their childhood bedrooms, some in far away time zones. When they write instead about what they’re going through — physically, mentally, financially — who am I to tell them not to? The creative writing students, at the other school, almost all write about death. Most everybody is battling the one thing that connects us: technology, including me.

Nunez quotes Franz Kafka: “The meaning of life is that it stops.”

What is anyone going through? I spent Thanksgiving weekend on an island in northern Wisconsin in a place so remote it is only accessible by ferry. There is one grocery store that also sells liquor and one other store that sells everything else, which is called the mercantile. In late November, three bars were also open, and the Lutheran church. The performing arts center is closed for now. So are the fiber arts school and the independent bookstore.

Even in the summer there aren’t many people on the island. By late fall, it’s just residents, a few peace-seeking visitors, and some guys in orange hats who come from the mainland for deer-hunting.

There’s something about an island that requires people to get along, the art people and the hunters, for instance. Despite the occasional crack of gunfire, people seem kinder there, more tolerant. Maybe that’s because there are so few. If you take a walk with your dog you have two choices, the beach or the road, and if you choose the road you might see a car and if you do it is guaranteed that the driver will slow and raise four fingers from the steering wheel in a laconic wave. I saw a few Trump banners still fluttering in the wind weeks after the election. The Biden folks had taken theirs down, maybe out of respect for others’ disappointment.

Here’s something: the island phone book lists 700 or so residents alphabetically by first name.  At first this seems amazing, funny. Later the sense of it comes clear, like first light. If you meet a Bob, say, at the mercantile while shopping, say, for a socket wrench, and want to track him down, you can look him up — under B. And if you see him in trouble later, you’ll probably help, whatever sign he has or had on his lawn. Because hey. There’s nobody else around. Is that such a bad reason?

In addition to fiction, I had my class read essays and a memoir. I tried to explain how those are different from novels, and not just because they’re “true.” We talked about interiority. In a novel you might come to know the thoughts and secrets of many characters, not just one.

A classic art assignment: set up a still life and tell the class to draw the negative space. Tell them, don’t look at the objects, look at the space around them and draw that. Pay attention.

Sometimes you can only see something by looking at something else. We talk a lot now about what we aren’t seeing – art, galleries, museums, concerts, faraway places we intended to visit, our friends and family. It’s a drag, yes. But what are we seeing? What if we paid attention to that, to them? Simone Weil also said: Attention is the rarest and purest form of generosity.