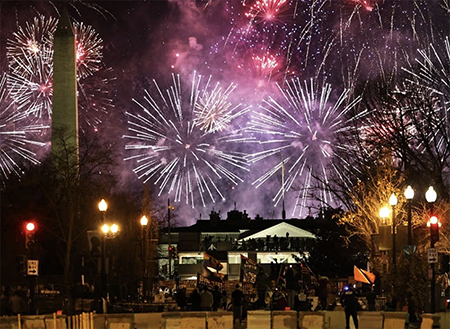 Fireworks are seen above the White House, with US Secret Service members watching from its roof, at the end of the Inauguration day for US President Joe Biden in Washington, DC, on January 20, 2021. Photo: Patrick T. Fallon

The word for the days following the January 20th inauguration has been “relieved.” The contrast between normal and deranged has never been less private. As Katy Perry performed her song “Firework” to a backdrop of perhaps the largest man-made fireworks display in history, concluding a long and thoroughly cathartic first day of the Biden administration, most of us were splayed out on our family room couches with a shit-faced smile of relief. The word art moment of Amanda Gorman reciting “The Hill We Climb” crashed through the rest of the day to impress its gravity on our collective memory of the day, and we began to chew on now-President Biden’s own word, “unity.” Perhaps it will all be outlasted by the humorous instant meme of Bernie Sanders’ winter mittens. But the most moving poetry is a couplet: “President Joe Biden / Vice-President Kamala Harris.” Never has the word “elect” been dispensed with such a feeling of … relief.

For the last four years all forms of art left unsuffused by the gravity and absurdity of the time has felt weightless and inconsequential. If the message was in the music, that music felt irresponsible. If the art was for art’s sake if felt in denial. Life in a fool’s paradise was the least menacing interpretation of that blessedly singular term. But over it hung the all too real possibility that our children’s professional aspirations would be reduced to a choice between goose stepping in a million man military parade or joining a Kippumjo women’s group dedicated to the pleasure of a single man. His political and media adversaries would have been prosecuted to the full extent of his law.

The wake of the insurrection, meant to replace a democratic republic conceived by a group of founding Deists with a clique of new Robespierres, revealed it all to be the most comical revolution in human history. Not as in funny but as in un-serious.

The sheer idiocy of this crowd’s unifying revolutionary theory of QAnon, as you’ve surely heard by now, was that members of one of the nation’s two major political parties had developed a taste for the flesh of children, both culinary and sexual, that fed their impulse to form a totalitarian cabal to bring to heel the world’s population pretty much as described in select books such as “The Turner Diaries,” “The Camp of the Saints” and “The Protocols of the Elders of Zion.” This fantasy government of, by and for pedophiles and non-whites would be destroyed in one conclusive event, the “Storm.” And the Storm would be unleashed at the behest of their new messiah, who would prepare his followers to be unleashed at the right moment, which turned out to be January 6, 2021.

There is a rather rich intellectual history that has been demeaned, not for the first time, by this dreamed of Storm. Sturm und Drang, translated “storm and stress,” emerged in mid-18th century as the reactionary opposite to the rationalism, or Enlightenment that informed the American founders. Rather than the systematic empiricism, discipline and restraint fostered by new developments in science and technology, unfettered emotion and unconstrained personal conduct informed some of the most creative individuals of the time, ranging from Goethe to Mozart to Goya, Friedrich, J.M.W. Turner and Géricault. These were geniuses of the highest order participating in a worthy cultural debate. Then there came the grand and deeply pessimistic Romanticism of Wagner. In case you believe the emergence of the various modernist movements were uniformly progressive and enlightened, Italy’s Futurists celebrated modern industrialization as fostering a glorious era of speed, violence and manly dominance 15 years before the rise of Mussolini. As F.T. Marinetti put it, “We will glorify war — the world’s only hygiene.” In 20th Century politics this rise of fascism, which indulged delusions of self-preservation channeled through the violent vision of a singular declared hero. His brainwashed masses reflect the chosen one’s singularity, a morality of sheer coercive power rooted in a binary myth of complete domination or Götterdämmerung.

What 21st century America has produced, seemingly inconceivable only five years ago, is a comic book version of this historical monstrosity. Trump was able to see it brewing because it was always there in the far corners of American culture. Perhaps his sole remarkable skill was his unhesitating willingness to sharpen the point of this human spear, and he succeeded in weaponizing it for his personal use. Kept at the ready for years, it kept his uneasy Congressional sycophants in line with the prospect of tweeted death threats and served as his final tool when all else had failed. Which is to say that January 6th was years in the making, nurtured to be the final, fatal bullet in an otherwise emptied firing chamber. Once expended Trump had nothing left, though the people he used (and discarded) still had their fantasies that persisted for two more weeks. No doubt the echoes will reverberate for years to come.

How close these insurrectionists came to being able to grab and possibly murder half of the members of the U.S. Congress has become clearer and the days and weeks since have shed light on that day. What would have happened had they succeeded? We know that after saying he would be “right there with you” as his sort-of army prepared to march to the Capital, Trump repaired to the comfort of the White House to enjoy the spectacle on TV. For several hours during the violence there was not a word of admonition. But the worst did not happen, and so the insurrection quickly became a resurrection as Congress reconvened in the middle of the night to complete the certification of an election.

Just as Timothy McVeigh had supposed his bombing of the Oklahoma City Federal Building would ignite a civil war, Trump’s insurrectionists imagined that the police and military would join them to impose their leader’s new world order. These were always flimsy bets. For 75 years Trump drifted from one con to the next without ever quite having his protective shield of financial and social privilege quite eradicated. The stakes here were finally too distant from the corrupt profiteering and self-aggrandizement of public attention. The coercive effect of the threat of violence crossing over to the exercise of the real thing proved at last to be that elusive bridge too far. This time. The members of his QAnon army still imagined a miraculous conclusion to their tale, or at least an umbrella of protection, in the form of Presidential pardons from the one for whom they risked all. For Trump, these people never meant a thing to him except as a personal instrument that he immediately cast aside in order to protect himself from being found guilty in a Senate trial. We shall see.

And so the sun rose on a mangled Washington on the morning of January 7th, and in spite of 25,000 federal troops and miles of razor wire, starting at noon on Wednesday, January 20th all of us who witnessed four years of this forced marriage with growing horror were able to see past the wreckage into an alternate future. The late morning light was crisp, bracing, full of the promise of better days. This war is over if you want it. This Republic is ours, and our children’s, if we can keep it.