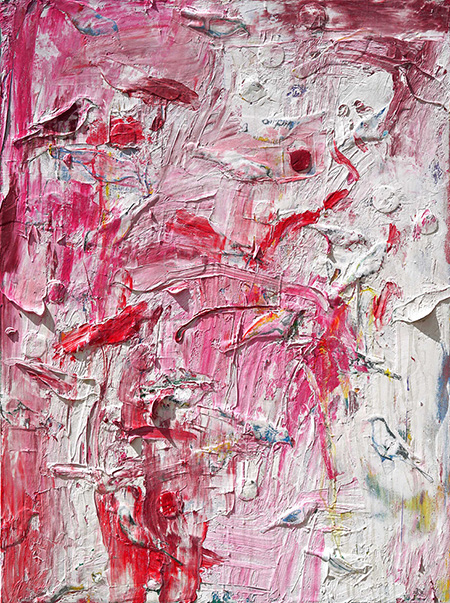 Artists often respond to the influence of the zeitgeist, and the past year and a half of COVID-19 has impacted much of the work that has been produced. For Roberta Harris, the virus brought a death in the family, health problems, and two studio relocations. Once settled, she returned to painting her birds, a motif that has been present in her work for half a century. But these paintings are different. Her brightly colored, beautifully rendered birds have been damped down and covered with white plaster and slashing strokes of paint.

In “Going to the Moon and Making Love Like Crazy” and “Gypsy Moon,” Harris has applied blood-red paint to the surface with expressionistic brushstrokes that suggest emotional and physical pain. These paintings are a departure from past work in which the birds were depicted with exuberant colors and plumage. For Harris, birds have always symbolized the life force, hope, and freedom, and the way she has passionately obscured them seems to be a response to her isolation. In contrast, “Fly Me to the Moon” from earlier this year exudes her elation at being released from quarantine. Cardinals, robins, blue jays, parakeets, and other types of birds emerge from the white ground to infuse the painting with energy and optimism. Harris began to visualize the surface of the moon in the plaster she was applying, scraping and manipulating. She described the process as satisfying and highly physical, saying that working the plaster into the surface was like making love to the canvas, hence the show’s title, “Going to the Moon and Making Love Like Crazy.”

Included in the exhibition are five totemic wall pieces that Harris refers to as “magic sticks.” Like the birds, the sticks have been present in her work almost since the beginning. Harris began working with found sticks in New York in 1972 while on a fellowship at the Whitney Museum of Art. In a statement on her website, Harris describes the process: “I filled my studio with sticks that I painted and then wound through canvas and fabric. I made piles of sticks. I drew sticks. I created installations of sticks. I wrapped sticks in groups. I carved sticks. I put sticks in boxes that I painted. I wrote about sticks. I made new shapes out of stick.” On her last day in New York that year, she visited the Museum of the American Indian and was astounded to see displays of shamans with medicine bundles enclosing medicine sticks not unlike hers. The medicine sticks were instruments used by shamans to commune with the sacred. Harris’s archetypal magic sticks are integral to her sculpture, paintings, works on paper and furniture designs, and through them, she connects to universal themes and the collective unconscious. They challenge her to see the world with respect and appreciation.

Both the paintings and the wall sculptures express Harris’s desire to create a dialogue with the viewer and inspire endeavors that will shape the future. By bringing this work into the world, Harris leaves the darkness of the pandemic behind and shares her journey of healing and regeneration.