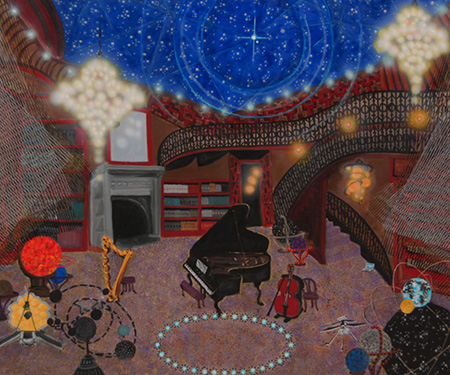 Michiko Itatani has been quietly making her cosmic-minded paintings in Chicago for decades. But at some time in her long career she took a turn into truly odd and original territory. From cool monochrome geometry suggestive of outer space she veered into a colorful inner space that feels inspired by both sci-fi and storybook illustration. There’s nothing else quite like it.

Itatani still makes both kinds of work, and “Celestial Stage,” an exhibition of nearly 60 paintings and drawings, features both, but I could not help but focus on the more magical paintings. In these, Itatani replaces sharp, precise edges with fuzzy ones that make room for possibility. In them, cool neutrals pair with deeply saturated primaries. These paintings have a visionary quality, but not in a proscriptive, showy way. The vision is personal and childlike.

Glowing chandeliers hang in vast libraries like benign visitors who have arrived from elsewhere in the universe with good news. Rings of light hover, also appearing to bear travelers from another galaxy. These energy beings hang and zoom among more familiar objects with which they seem companionable, objects that represent the highest human achievements — grand pianos, harps, telescopes, tall walls of books.  Double-helix stairways twist skyward, the likes of which you won’t see outside the Chambord Castle in France.

In Itatani’s world, mere human space and time is irrelevant. Digital technology and ancient wisdom coexist. It’s all knowledge, after all, and time is an illusion, isn’t it? There are rockets, zodiacs, orreries, and some glorious things Itatani calls quantum chandeliers. Windows open onto densely starry skies. What place is this? Or is it not a place but a condition, a vision of collective accomplishment that reaches beyond history? The artist seems to ask if these light beings are among us all the time, guiding us to music and mathematics. Can we only see them, as Itatani does, if we too give up tidy edges?

What raises Itatani’s work way beyond conventional fantasy is how she paints. She works with an acquired blurriness and a blunt manner that is deceptively and determinedly naïve. Itatani employs this technique perhaps to tell us that these marvels are only visible to the innocent eye. Double down on logic, and you’ll miss it; all will revert to angles and edges. But permit yourself to assume a beginner’s mind and dense colors will bloom in your head, dreamlike visions won’t fade upon waking.

Itatani’s paintings are about nothing less than channeling the secrets of the universe through the human senses. Itatani allows for the use of some elegant tools, too. What’s the secret of life we ask, and she answers harp, spaceship, quantum chandelier.