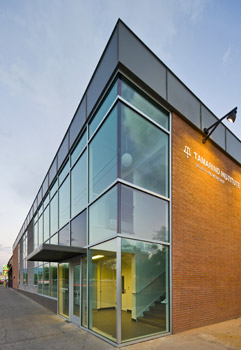 It was the best of art openings: wall-to-wall people, fine wine and food, great talk and observation. But it also marked a unique moment: the renowned lithography workshop Tamarind Institute had unveiled, after a year of construction, its stunning new home--a soaring 16,000-square-foot, concrete, glass and steel space built from the ruins of an old architecture warren at the University of New Mexico in Albuquerque. The building was a whopper of a present for a milestone birthday. Tamarind turns 50 this year.

The June 30 housewarming kicked off Tamarind's "Fabulous at Fifty" celebration, a symposium and party that runs September 10-12. The symposium features Ed Ruscha with Dave Hickey, Jim Dine with Ruth Fine, June Wayne and Garo Antreasian. Tamarind-trained printers from around the world will be on hand. Ruscha, Dine, Wayne, Antreasian and the late Clinton Adams will receive Legacies in Lithography honors. Capping the celebration is an exhibition of Tamarind prints from the past fifty years. Organized by Tamarind and the UNM Art Museum (which is slated to open its own new renovated and expanded space on September 10), the show is supported by a $100,000 grant from the National Endowment for the Arts and features 58 seminal images. "Tamarind Touchstones: Celebrating Excellence in Fine Art Lithography" will hang in the museum's Clinton Adams Gallery through December then travel the United States. The Legacies in Lithography honorees will show 15 works in a tandem exhibition at the Tamarind Gallery.

Just three people have directed Tamarind since it was launched in Los Angeles in 1960. Founding Director Wayne gave the reins to Adams when Tamarind moved to the UNM Department of Fine Arts in 1970. Marjorie Devon, who joined Tamarind as publications manager in 1978 and succeeded Adams as director in 1985, says the institute has worked consistently to fulfill and expand its mission. That mission as envisioned by Wayne was to revive and preserve what in 1960 was the waning art of lithography, the most complicated of fine-art printing processes. To make a lithograph, a process invented in Germany in 1798, the artist draws with a greasy substance on a stone or plate; the stone is inked, then run through a printing press to transfer the image to paper. Tamarind would train apprentices to create a pool of master lithographers who would then open their own print workshops, making the medium accessible to a range of artists.

"Many contemporary artists would never make a lithograph unless they had access to a professional printer," Devon says. "What Tamarind has done that is so important is to have trained those master printers for 50 years and sent them out into the world." Entwined with that goal is the effort to attract artists to the medium. Tamarind has trained several hundred printers and worked with as many artists. The artist/printer collaboration existed in parts of Europe, but was new to the United States. "Tamarind changed the landscape of American printmaking by establishing the notion of collaboration between artist and printer in this country," Devon says. The institute's impact has been such that recently there were 200 US workshops where artists could work with printers.

An artist is invited to spend two weeks at Tamarind collaborating with its master printers. Many of the artists have never made a lithograph while some have made hundreds. The visit generally results in two or three images. The artist works through the entire process with the printer, testing colors and papers, drawing, doing proofs, deciding which to publish. "It's a different way of thinking," Devon says. "Each color requires drawing a separate stone. The artist must deconstruct then reconstruct an image. When people ask why would an artist want to make a print, there are a lot of reasons. The best is that it uses a different aesthetic vocabulary." Tamarind has no specific aesthetic point of view; rather, the institute works with a wide range of artists so student printers can have a variety of technical and interpersonal experiences. Among the many artists who have worked at Tamarind are Ruscha, Dine, Roy DeForest, Kiki Smith, Jose Luis Cuevas, Hung Liu, Mark Licari, Jaune Quick-to-See Smith, Gary Simmons, and Lesley Dill.

Tamarind also has the world's only systematic educational program for professional lithographic printers. The institute trains eight printers a year selected from about twenty applicants, based on their commitment to lithography. One or two of those students stay a second year as paid apprentices working under Tamarind Master Printer Bill Lagattuta and collaborating with visiting artists. About half the students are from outside the US. Those students often go back to their own countries to start workshops. One of Devon's goals was to develop the program internationally, so Tamarind designed art projects that reached out to painters, sculptors and students in other countries. "It brings them into the mix here, which is really nice for our students and staff, and gives everybody a broader cultural perspective," Devon says. Lagattuta, the shop manager, studied at Tamarind in the late 1970s, then joined the staff in 1988. "Tamarind takes the mystique out of lithography and explains it in logical terms," Lagattuta says. He adds the students are focused and passionate, working 60 hours a week. "The artists keep me on my toes. I love it. I think I have the day figured out, but it never works that way. It's high energy."

Tamarind's educational programs are funded largely by the sale of lithographs from its extensive catalog. Print sales total about $300,000 a year, roughly half of Tamarind's budget. Ninety percent of those buyers are from outside New Mexico. "People know the artists' work. They know our work. They trust the quality of the work from Tamarind," Devon says. Half of Tamarind's inventory is sold through galleries, often to corporate collections and art consultants. John Addison, director of Chiaroscuro Contemporary Art in Santa Fe, has been a Tamarind client since the late 1990s. He says Tamarind prints form an essential part of his inventory. "Tamarind works with the best national and international artists to create work that has the essence of the artist's unique pieces but is produced in edition so it becomes affordable for collectors," he says. "David Row's paintings retail from $20,000 up, but not his prints. It's a way for people who are interested to have access to extraordinary contemporary talent that might otherwise be outside their collecting ability." He notes that Tamarind gives artists room to experiment; working with a master printer fosters an anything-is-possible attitude. "That high quality comes through in every Tamarind publication," he observes, adding: "They get the best out of those invited artists."

It took $5 million, pieced together with money from the state, foundations, and other donors, to put Tamarind in its spectacular new space. It replaces a cramped, nondescript, nearly windowless building tucked on a side street behind the busy Frontier Restaurant. The new Tamarind, nearly double the size of the old, runs a block along Central Avenue--old Route 66--across from UNM. There's a lofty penthouse apartment for visiting artists and offices for the staff of seven. There's space to store prints, slabs of stone and equipment. The gallery is airy and spacious. Huge windows line the street level, inviting pedestrians to peek inside. A slide show of artists and printers working together, shot by Taos documentary photographer Dorie Hagler for the state's public-art program, runs 24/7 in view of Central Avenue traffic. "When people walk by they can really see what we're doing. It's a way to have a conversation with the public. It's more visual and welcoming," Devon says. "I've dreamed of this for a very long time."

Devon says it's ironic that Tamarind's mission going forward is very similar to Wayne's vision in 1960: to preserve the art form. The rise of digital media has diverted interest from lithography. "As my generation of printers retire and are replaced with digital people, I feel now that our mission is as important as ever in terms of preserving this ancient craft," she says. "But I think people will always return to the touch of the hand. We are one of the few shops left in the country that has artists work on stone. We're protecting a very basic but very essential hand craft." Along with Lagattuta and Tamarind Education Director Rodney Hamon, Devon recently authored the hefty reference book "Tamarind Techniques for Fine Art Lithography," a definitive, one-of-a-kind technical manual. "That book is the bible on lithography, a major accomplishment," says Addison. Shelly Smith, Tamarind's marketing and development specialist, is using new technology to preserve the old, reaching out to the vast community of Tamarind artists, students, collectors and supporters through Facebook, Twitter, and online newsletters.

Meanwhile, Tamarind's national reputation continues to grow. "Here we are fifty years later and people are still supporting the institute," says Addison. "It enjoys an excellent reputation, and that reputation is directly tied to the artists printing there and the quality they put out." He notes there is an honesty about Tamarind apparent to everyone who works with the institute. "It's all about lithography," he says. "There's nothing trendy about Tamarind. Lithography used to be more popular, but there are so many digital ways to reproduce images, the marketplace for multiple images is more competitive. Tamarind has stuck with lithography done the traditional way and had success."

Perhaps the best perspective on Tamarind comes from John Mulvany, curator of the "Tamarind Touchstones" exhibition. UNM holds the Tamarind archive, two impressions of every lithograph produced by the institute since 1960. Mulvany spent 12 months going through those 14,000 images, culling them to a relatively few. Living with the Tamarind archive for a year was a great opportunity to fully understand fifty of the most exciting years of American art. "American art has been added to dramatically because of the marind method of collaboration," Mulvany says. "A lot of the great artists of the past fifty years would never have made prints without having a master printer for the interpretation." Notes Devon, looking back on Tamarind's place in history: "Our legacy will live well beyond any of us."