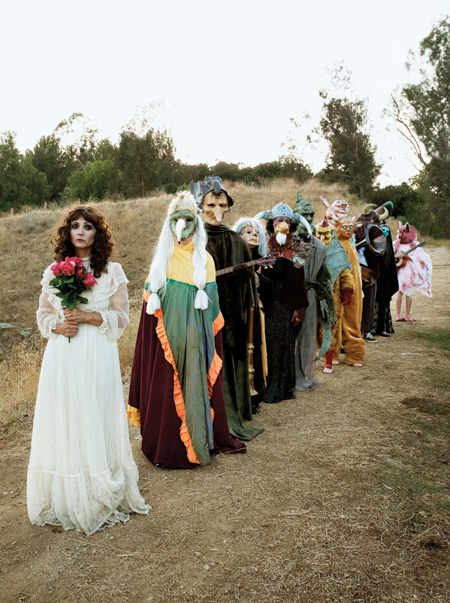 The proliferation of public and non-profit art organizations that have taken root in Los Angeles is a healthy indication of the city's thriving contemporary art scene. Against the backdrop of the long established brick-and-mortar institutions, such as LACE, 18th Street Arts Center, and The Armory, there is the newly established Art Center Los Angeles (ACLA), as well as those who have taken a more nomadic approach, such as Phantom Galleries LA and Launch. While each of these groups fosters its own identity, they collectively offer some of the most cutting-edge work seen across the landscape of LA. Few such groups, however, operate quite as outside the box as Emi Fontana's West of Rome Public Art, which has earned its own unconventional reputation for holding temporary multi-experiential exhibits throughout the city's diverse urban geography.

West of Rome began in 2005 in a private residence located in the suburban hills of Pasadena. Emi Fontana, who had operated Galerie Fontana in Milan since 1992, had recently arrived in Los Angeles, and wanted to work within the arts but outside the constructs of the gallery system. "It wasn't something I woke up and decided to do. It was always part of who I was," Fontana recalls. "In LA, all the wide spaces, the horizon, it inspired me to work outside the white cube." For the first of these, Fontana worked with Denmark's Olafur Eliasson, who had just exhibited the acclaimed "The Weather Project" for the Unilever Series at the Tate. Eliasson's West of Rome project, "Meant to Believe In: Today I am Feeling Prismatic," restructured the interior of the Escher GuneWardena-designed home beyond even the owner's recognition, as noted by Fontana. The house was open for public viewing for a period of two months effectively launching the organization and series of public works that put Fontana in the unique position of, in her words, "curating locations."

Since then, West of Rome has consistently produced numerous collaborative projects combining music, video, and installation along with just about every other genre of contemporary art. Often these projects seem to focus on sensory experience--or, just as often, in destabilizing it. The Eliasson project was followed with Monica Bonvicini's Not For You (2006) in Pasadena, and Diana Thater and T. Kelly Mason's post-Whitney collaboration Relay the following year in a former bridal shop in Westwood. The Thater/Mason collaboration featured a band covering the Buzzcock's 1979 song "Why Can't I Touch It." The band was filmed repeatedly playing the song in a mirrored room, and for its presentation, was then projected into another similarly mirrored room. In the final work, the reflection of the audience merged with that of the performers, creating a virtual collaboration of the two again exploring the theme of perception.

This past summer, the theme of immersion became what Fontana has described as an almost "existential journey" with Mike Kelley and Michael Smith's "A Voyage of Growth and Discovery." Co-produced with West of Rome and the New York-based Sculpture Center, Kelley's expansive Eagle Rock studio was filled with familiar, yet slightly altered, objects: a line of port-a-potties, a VW bus occupied by an oversized armchair chair made from Kelley's signature timeworn stuffed animals; seven metal structures reminiscent of playground jungle gyms; video screens displaying the adventures of Baby Ikki (aka performance artist Michael Smith) at the Burning Man festival, along with a statue of Baby Ikki, constructed of found materials reminiscent of the sacrificial Burning Man figure.

"West of Rome will go where no one else will," says artist and musician Marnie Weber whose recent exhibition and opening night performance, titled Eternity Forever, held at Mountain View Cemetery and Mausoleum serves as a prime example. Weber recalls she had often thought how the mausoleum--which is close to her Altadena studio--with its on-site art gallery would be an ideal setting for an exhibition, but never imagined how multi-faceted the final project would become. She credits her collaboration with West of Rome, which was three years in the making, with allowing her to achieve her goal "on a much grander scale than I might have envisioned."

The 100-plus-year-old cemetery and adjacent Gothic-inspired Cecil E. Bryan-designed mausoleum serves as final resting place for not only several silent film stars, but also decorated Civil War soldiers and officials, and even the architect whose remains are interred above the entrance. Fittingly, Weber's gothic tale begins in a silent film style, complete with title cards, musical score, and Weber as the central "damsel in distress" character seemingly imprisoned to eternal loneliness and servitude to her father. The story evolves through a narrative of hope, sacrifice and transformation, expressed through a series of purposefully melodramatic scenes and distorted visual effects, before resolving into a series of sweeping views of the misty graveyard interlaced with costumed characters collaged into the film.

In addition to the screening of her film and collaged work in the mausoleum's art gallery, West of Rome sponsored the opening night festivities, which included tours of the historic graveyard throughout the cold, blustery night given by costumed characters and what may have been the final performance of Weber's alt-rock group, The Spirit Girls. "It was a strange experience for me,' Weber says of performing in the cemetery, "with this modern loud rock equipment leaning up against the crypts... You see art in an unexpected place and it tweaks your brain."

Another aspect of West of Rome is the non-profit endeavor "Women in the City," which was established in 2008. The ambitious inaugural collaboration consisted of a series of billboards in over 300 locations throughout Hollywood, Mid-Wilshire and Downtown Los Angeles designed by leading feminist artists Barbara Kruger, Cindy Sherman, and Jenny Holzer. The multi-media component that is a signature quality of the projects taken on by Fontana was also evident in this expansive collaboration. It was not only visible in Kruger's video billboard, Plenty, and Holzer's Truisms, shown over the Gap Store at the much-trafficked and advertorially coveted Hollywood and Highland intersection, but also audible in the reinstallation of Louise Lawler's 1972/1981 sound piece, Birdcalls, at The Huntington Library in San Marino. Lawler's reinstallation of faux birdcalls squawking, screeching and chirping the names of famous male artists in the cultivated gardens at once conjuring a multi-tiered incarnation of the nature/culture debate.

It becomes evident that Fontana's approach does not adhere to any set pattern. Instead, each undertaking follows its own evolution. "Every project starts in a different way, sometimes I really want to work with an artist and I approach them, or I know an artist who has an idea and it seems like it could work with what we do," Fontana says. As an example, she describes learning of Jennifer Bolande's project through her affiliation with Kruger, which led to a studio visit with the artist and the current Women in the City undertaking, the Plywood Curtains series.

Known for blurring the distinction between photography and sculpture, Bolande subtly blurs boundaries here by printing images of photographed plywood onto pleated curtains, and then hanging them in vacant storefronts along Wilshire Boulevard, Chinatown and Pasadena. Once installed, Bolande's curtains at first appear as boarded-up windows, until one notices the soft undulation of the hanging printed fabric. "The Plywood Curtains bring an awareness of the changing face of the city--simultaneously making visible the city's recent past as well as its character at this transitional moment," Bolande explains. "In fact, the project takes place at a number of in-between spaces. It is in-between interior space and the street, between image and object, object and event, art and design, the present and the immediate past."

While economic implications abound in the work, there is an equivalent factor at play, a cognitive shift when one first realizes that the window coverings are not actual sheets of splinter-ridden plywood barricades. "I love double-takes," says Bolande, "when something suddenly shifts from being negligible to being the center of attention. The curtains invite a double take. Something solid has become pliable and mobile. At a glance, they register as a sign of construction or destruction. On a second look, something else is there." Adding to the dichotomy, these installations are not readily identified as "public art," the only identification of the works is a semi-transparent decal located inconspicuously in the lower part of the windows. This allows the viewer to encounter the work without expectation. As Bolande notes, "It can be extremely generative to encounter something in a location or form that you might not immediately identify as art."

Both the spirit of re-examination and transformation seem to be at the very heart of Fontana's endeavors. Although she has collaborated with artists whose work is quite distinct from one another, there is a connection between their ability to toy with the viewers' perceptions. This includes challenging preconceptions of public art and its permanency--murals, sculpture, commemorative statuary--with ephemeral works reflective of and reactive to their locale. Speaking of the term 'public art,' Fontana responds, "It is such a vague concept, and much abused... What does it mean? For me, all art is public."