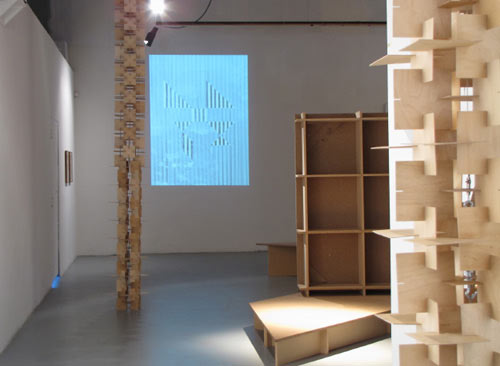 Six emerging artists from Ireland — Anna Barham, Cath Campbell, Maud Cotter, Laura Gannon, Alexandra Navratil, and Linda Quinlan — are featured in “Enter Slowly,” (and, yes, that’s with the comma), curated by David Cunningham. It’s an apt title. Cotter’s towering notched plywood structures, “More Than Anything,” greet you at the front door, climb up the steps with you, and sprawl throughout the somewhat dimly lit upstairs space, where they are joined by Campbell’s wall of pierced honeycomb panel, “50 Ways to Leave Your Lover (No. 46),” and Barham’s plinth of triangular, square and rhomboidal plywood segments, “Tangram (Posture).” In other words, tread carefully. Anything can happen.

Besides, then, worrying about blundering into installations like a china-shop bull, the viewer knows their assumptions about reality — cultural epiphenomena, to be sure — will be questioned or subverted. You may feel like one of the prescient Philistines warily entering Samson’s temple. The culturally determined construction of meaning (to which we add its destruction) is the primary subject of the show.

Barham has imbibed German philosopher Ludwig Wittgenstein’s ideas on the relativity of language, as evidenced by her drawing, “If I know an object I also know all its possible occurrences in states of affairs/Portrait of Ludwig,” with its crossword-like grids of anagrams. Anagrams also feature prominently in her book, “Return to Leptis Magna” (an ancient Roman city in Libya, its site reconstructed on the cheap in Georgian Britain), her 45-minute reading of the “text,” her projection piece “Proteus,” and, of course, her installation, “Tangrams” being nothing more than geometric anagrams.

Campbell contributes, along with her honeycombed wall, a series of pencil drawings on paper, “Possibly Maybe Study No.3” and “You Fill Up My Senses Part 2,” that resemble architects’ drawings in deep perspective. The floating planes of Constructivism are dotted by projection lines, with sections cut into gridded lattices, as well as into polygonal shapes that are float-mounted. Her stainless-steel version, “Night and Day” (she likes song titles), suggests fossils from the age of steel-frame buildings. Her film, “50 Ways to Leave Your Lover,” is a slide show of various wooden architectural models simplified to the point of geometric abstraction.

Gannon is interested in imagery and narrative unfolding in time. Her video, “A House in Cap Martin,” considers the now-decaying former home designed by the Modernist architect Eileen Gray, the oddly named E.1027. It calls to mind Piranesi’s fanciful prisons that so influenced 20th century surrealists and sci fi illustrators two centuries after the fact. She also considers Gray’s mistreatment by Le Corbusier, whose mural, legality notwithstanding, looks pretty good eight decades on. Her drawings on glass panels mounted on a tabletop, “What the Designer Saw,” has possibilities, with its references to camera obscura and zoetropes, but the imagery is only superficially considered.

Quinlan’s video “Side Step” appears to be an Op Art painting with its white stripe become transparent, allowing flickering, flashing photographic images to add a contradictory frame of reference. A dedicated soundtrack deconstructs the power and meaning of words, adding to the sense of alienation.