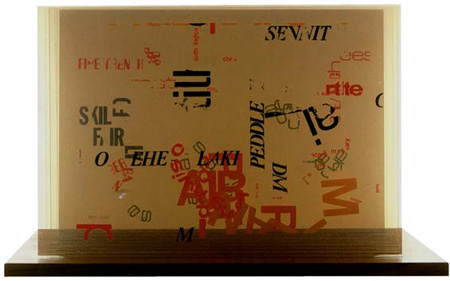 John Cage is the runaway star of “Game Theory.” Perhaps best known as the experimental composer behind the composition 4’33”, Cage’s 1969 construction, “Not Wanting to Say Anything About Marcel,” is a beautiful piece with silkscreened text on a series of Plexiglas panels. Using the I Ching, Cage selected text, which is placed every which way, and reads as a random set of shapes and swirls. The partial letters and numbers become abstract marks on translucent panels. This forty-two year old piece still looks new.

Cage’s work keeps company with contemporary artists using both old and new technology to raise issues of randomness, meditation, violence in pop culture, and the use of video surveillance. A disturbing piece by Brent Watanabe, “High Noon” (the title of a 1952 film staring Gary Cooper as a sheriff) features a speaker connected to a motion sensor. Every forty minutes, sounds of gunfire reverberate in the cement-floored gallery. Step in front of the sensor and you’ll be its “victim.” On the wall opposite the sensor hangs what looks like a thermostat; on it reads a tally of how many people have been “shot.”

Sounds overlap and interfere in this gallery, whose back room runs a loop of “John Cage: From Zero,” four movies of and about John Cage by directors Andrew Culver and Frank Scheffer. The films are in close proximity to a quieter work by Cara Tomlinson, “Apophenia,” which Merriam-Webster’s dictionary defines as “the experience of seeing patterns or connections in random or meaningless data.” Tomlinson’s work is comprised of a dozen small video displays, each running its own scene, with a tangle of black cords connected to what appear as sound boxes. We hear and see a moving train, two blinking eyes (one human and one that appears canine), a rain-smeared automobile windshield, and the view from a subway car. There is motion on all screens at varying speeds, and the soundtracks - when one can discern them - spill over and into each other. Occasionally a Cage drone (from the films) overwhelms all twelve soundtracks.

Chauney Peck’s “Directional Wall Painting” is a series of white and beige marks which read as a stylized map. The wall tag explains that the piece was “Executed by Cornish [College] art students, following instructions and a deck of altered playing cards, sent my Peck in the mail.” Here is Cage’s fondness for chance actions, codified and sent through the postal system, and for art-making once removed from a single creator’s hand.

In recognition of Cage’s primary role as a composer, a series of concerts will take place in the gallery. Well-known improvisatory musicians Wayne Horvitz and Paul Rucker will perform (October 8th and October 14th respectively). Rucker is a multi-instrument musician and the designer of a wall of scratch-off cards that promise to reveal an emotion “to be performed by the composer of your choice.” The idea of these concerts is perhaps the best ode to John Cage and his game-like creative process.