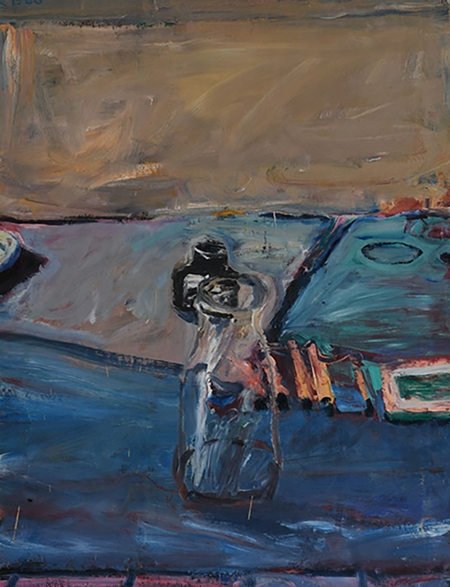 “Alternate Realities” is a small but revealing selection of paintings and graphic works by John Altoon, Richard Diebenkorn, Frank Lobdell and Emerson Woelffer, four artists seminal to the development of mid-20th Century California abstraction in California. The exhibition points to the ways these artists worked within the parameters of an intensely inward-looking Abstract Expressionism while nevertheless keeping their own distinctive eye on the world around them. They mined their observations of the sky, hills, sea, and flora of their L.A. and Bay Area homes into abstract works that blended psychological self-exploration with a rooted and unambiguous sense of place.

Nearly a decade before turning to the human figure and still lifes for subject matter, Diebenkorn produced richly textured non-representational compositions that, while not conventional landscapes, did strongly suggest them. His well-known “Berkeley” series stand as breakthrough works. In this show, “Berkeley #24” (1954) pulses with energy while calmly contemplating the geometry of the plush, hilly streets and sea swept vistas and atmosphere that shaped Diebenkorn’s East Bay Surroundings.

Altoon’s “Ocean Park Series #8,” (1962) sparkles with playful forms suggestive of the human body. Its appearance is one of quick, sketchy rendering, and there is a devious suggestion of Hollywood cartoons, all thumbing the paint brush at the by-then hackneyed East Coast Abstract Expressionist’s “Art as Religion” credo. Trained as an illustrator, Altoon produced a group of vivacious experimental lithographs at L.A.’s famed Tamarind Lithography Workshop, several of which hang in this show. During his residency at Tamarind the artist would use transfer paper to blend into his prints the textures of materials such as linen, cardboard and broom bristles. One sees here how Altoon’s work also established a kind of surface vocabulary that would soon become part of the “Finish Fetish” and “Light and Space” art movements central to L.A.’s emerging Avant Garde.

During the mid-1960’s, Lobdell taught with Diebenkorn at the San Francisco Art Institute. Lobdell had fought in WWII, an experience which would affect and challenge him psychologically for the rest of his life.

“I painted my way out of a lot of this … an unloading on the canvas,” the artist once wrote. In the painting titled “November 1961” (1961) we can sense Lobdell’s angst. Here against a field of smoldering red the artist strings a diagonal line of biomorphic blobs or discs. It’s as if a disembodied exiled spinal column — the sensitivity of the artist or even of art itself — were to look for a human body to claim and calm it.

Lobdell’s prints in the show inhabit a lighter zone, one animated by deftly drawing images that at once suggest a folksy community-based Chagall-like religiosity and a Star Wars propelled cosmic wandering.

The exhibition’s back room houses a quiet collection of Woelffer’s paintings and prints. Born in Chicago, Woelffer eventually settled in Los Angeles where he became a model of West Coast Modernism and an inspirational teacher at the Chouinard Art Institute and Otis College of Art and Design. A self-described “abstract surrealist,” Woelffer was fiercely committed to the process of creating art spontaneously and to shaping the images that emerged from his unconscious in the act of making. By faithfully adhering to his directive to “Paint first, think later,” Woelffer explicitly linked himself with many of his East Coast Action Painting brethren, most notably Jackson Pollock. That said, Woelffer’s prints here reveal a more reserved and measuring eye, one which resulted in existential, Zen-like graphic works.

“Alternate Realities” links the four artists by geography and their common grounding in immediate post-war art in what its curators present as a representation-tinged version of Abstract Expressionism. Yet each also charted and forged very different individual aesthetic paths that broadened and enriched the fine art identity and atmosphere of mid-century California art.