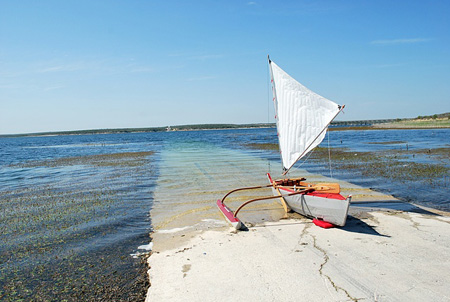 Master craftsman, wordplay wit, and conceptual artist Michael Arcega continues his investigation of native cultures and the impact of colonization on them. The current exhibition has two primary parts: the first, documenting a trip which was inspired by the correspondence between Lewis and Clark. Arcega took a collapsible outrigger canoe named “Baby” that he hand-crafted; images of various legs of the trip as well as “Baby” (complete with several blow-up balls inside, one with the Spam logo on it, a reference to Arcega’s earlier Spam maps; also note that “spam” is “maps” in reverse) are on exhibit. Arcega’s exploration is, however, a reversal of Lewis and Clark’s travels, as he travelled West to East, in effect an act of “decolonization.” This turning things back on themselves is a common thread in Arcega’s work and also streams nicely into the second part of the exhibition.

The second part was inspired by the 1956 book by Horace Miner, "Body Ritual Among the Nacirema," which explores the “little-known group, the Nacirema.” In truth, it is a satirical take on the investigation of “other” cultures by looking at 1950s America through an the lens of anthropology. Note: “nacirema” is American spelled backward. Arcega takes this concept and runs with it: among other items he presents a piñata mobile featuring “icons of the Nacirema,” which includes a tater tot, the statue of liberty, and a microphone. The titles of the objects have the flavor of being from a native language, but are indeed a play on words. For instance, “Tot-Retat,” which spelled backward is “tater tot,” and “Cim,” which, of course, reverses to “mic.”

Applying thoughtful first-hand investigation, word play, and craft, Arcega playfully and pointedly, with a biting wit, reflects our culture back to us. Echoing Miner, the posture establishes enough of a distance to place us as outside observers, but with enough familiarity that we get the joke. And it’s on us.