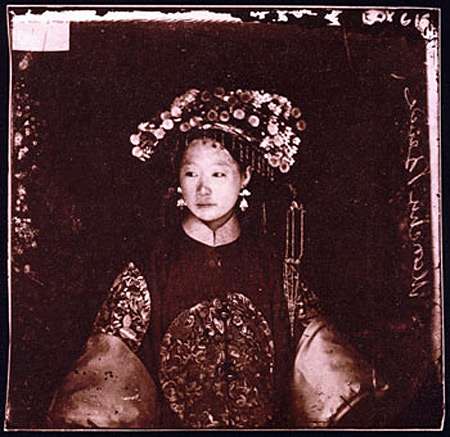 Scottish artist, John Thomson, was well known as an inveterate traveler, geographer and primarily a photographer. In later years he would be the official photographer to the British Royal Family. His trips to the East began with a voyage to Singapore in 1862 that lasted a full decade while he made excursions to Ceylon, India, Bangkok and a host of other exotic locales. During this time, he briefly returned to Britain before re-embarking to areas in China that were remote and perilous — and where cameras were completely unknown.

The equipment he used required the use of glass plates, heavy equipment and explosive chemicals. In fact, the images on view here are the product of high-quality scans from Thomson’s original glass plates — and they shimmer with exotica.

Thompson captured daily scenes of merchants, monks, roadside shrines, ruined architecture and pagodas. “Street Gamblers” (circa 1868 -1871) is a case in point. However, some of the most moving images emerge via his remarkable portraiture. “A Manchu Bride, Beijing” is particularly riveting. The sadness of her eyes and the curve of her lips let us know that her marriage is likely to be less than joyous; in fact, according to historical lore, relationships were typically characterized by abuse and despondency.

Thompson is widely regarded as a pioneer in photojournalism. However, what emerges is more than a literal chronicle. His work unfolds as an emotional narrative of a bygone time in a highly exotic land. For those who enjoy the literary work of Lafcadio Hearn (Japan) or John Blofeld (Peking), this is a marvelously interesting show. For mental voyagers, the precise locations captured matter less than the engendered sensibility — the willingness to imaginatively roam and explore parts unknown — terra incognita. There’s hardly anything more delightful.