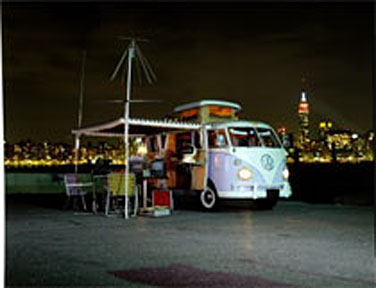 The nightmare of a totalitarian coup may be best signified by someone in uniform bumping your favorite news anchor to announce an act of glorious national salvation. But what is it like when an artist intervenes, not to control the media but to momentarily use it for a creative purpose and then get the heck out? Or instead of rerunning old programs for new ad revenue, they serve as a canvas on which to construct something quite. . . different? "Broadcast" is a traveling exhibition braves what could be dull (this is, after all, an installation of TV monitors) or ridiculous marginalia in order to construct the framework of a history where none was previously defined. Quite apart from the rise of video in art, the use or appropriation of public media requires effort and risk not just beyond the strictly aesthetic; as evidenced here, it can alter aesthetic thought itself. If curator Irene Hofmann perhaps obsesses too much on selections that catalogue distinct types of interventions, the sheer nerve of setting up one's own pirate radio station in a basement (Gregory Green), or holding an interviewer hostage at knifepoint on air (Chris Burden) is shocking and invigorating. Whether inserting an utterly out of the mainstream perspective on current events (TVTV's "coverage" of the 1972 Republican Convention) or recasting them in retrospect (Dara Birnbaum's treatment of the 1977 Baader Meinhof gang's kidnapping of Hanns Martin Schleyer), it is striking that this small coterie of works vividly conveys how narrow are the conventions public media must restrict itself to, and ultimately how brittle they are for all of their economic and cultural power.