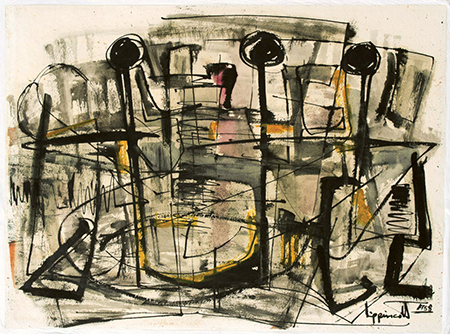 When Janet Lippincott made New Mexico her permanent home in the 1950s, she joined a small but prolific band of modernists, who’d formed budding artist colonies in Taos and Santa Fe. It would be a mistake, though, to think of this fantastically hard-working, vivacious artist as anything other than a complete original. "Janet Lippincott: Composing in Black and White" is an elegant tribute to a painter of the highest order. Even in bohemian Santa Fe, where she built her home and studio on Canyon Road, Lippincott was iconoclastic, known for selling paintings on the plaza and holding auctions out of her studio when money was tight.

Works from various periods showcase Lippincott’s affinity for contrast. An untitled watercolor (1958) is a dynamic tangle of washy gray and squiggly black lines, the latter of which are teased with highlights of goldenrod and olive — it’s a testament to mid-century understatement. "The Open Door," a lithograph from 1973, contains variations of grey arranged in a wholly non-objective central mass, which in turn is segmented by vertical lines and fuzzy almost-patterns. Its middle is a clean patch of opaque, deliciously Southwestern turquoise.

More often than not, Lippincott’s fearless use of color occurs as primal in its disregard for rule and structure; an untitled oil painting from the 1960s incorporates a dizzying range of pale green and tan, arranged in blocky segments delineated by brushy black outlines. It’s shot through with yellow and grape, and bordered by clusters of brackish blues and browns on the right. The painting has no rules, conveying a childlike curiosity about color and pattern, and endearing us further to the extraordinary Janet Lippincott.