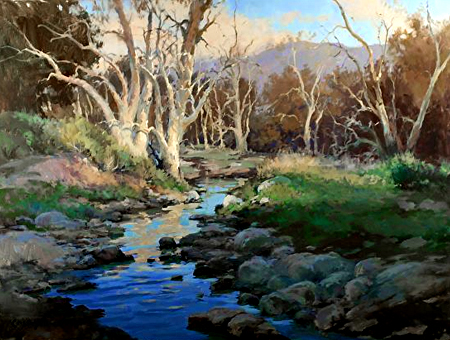 It is unusual for a museum to hang 100-year-old paintings alongside nearly new ones, with all works done in the same or similar style. But this regional museum, dedicated to traditional California impressionist art, has done just that. Once the surprise of the presentation of “Then and Now: 100 Years of Plein Air Painting” passes, we are left with a genuinely intriguing display of 52 works. Perusing a William Wendt painting alongside John Cosby’s contemporary one reveals how the latter work is true to the older style. Were these paintings not labeled, it would be difficult to determine when the individual works were completed. Which brings up the question — do contemporary California Impressionist paintings have intrinsic value, or are they merely derivative of the classic works? Perhaps the answer lies in the tendency for artists over the centuries to backtrack in style, whether to raise fresh issues via previously exhausted styles or as a matter of mere redundancy.

Most of the contemporary paintings in this exhibition, all undated but painted in the last 10 years, are true to the classic style in composition, setting, intent and carefully rendered brushstrokes. Cosby’s “Morning Shadows” is a bucolic rural scene with gentle blue stream meandering among rocks, grass and trees beyond, and sky and canyons in the background. Anna Hills’ (1882-1930) “Summer in the Canyon” is a similar scene, yet the prevalence of brown and sand indicate the dryer summer season. The contemporary “Little Treasure Cove” by Jesse Powell, with rocks jutting out into stormy blue and white water, echoes yet is not derivative of Frederick DuMond’s (1867-1927) “Laguna Beach” with its rocky cliffs overlooking the ocean. While this exhibition raises questions about the significance of creative originality, the paintings and their juxtapositions to each other create a little treasure of a show.