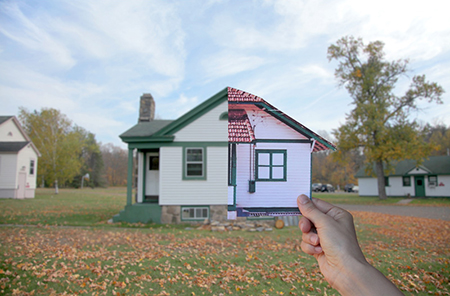 Clarissa Tossin's intriguing exhibition, "How does it travel?" turns the entire gallery space into a container for her conceptually rich work. The baseboards are painted green to match the trim of many of the houses in the photographs that dot the gallery walls. A rubber cast of an old VW, “Transplanted (VW Brasilia)," graces the floor inside, while the model for this cast — the actual car — is parked outside the gallery. The show is about displacement and the myriad ways objects and places can be juxtaposed to point out similarities and differences. For example, Tossin traveled back and forth from Alberta, Michigan to Belterra, Brazil because each location was a Ford Motor company town going back to the 1930s. One operated a saw mill the other a rubber plantation.

The artist photographed the cabins alone in both locations, then photographed a reproduction of the cabin juxtaposed in front of the actual cabin in both locations. The images effectively paired the two. Artworks about rubber in the form of a tree on loan from The Huntington Gardens, the deflated VW and seeds from Ford's Amazon rubber towns propel the content of the work beyond its formal properties to topical issues of globalization and trade. Tossin's work is engaging on both visual and conceptual levels as she seamlessly weaves together aesthetics and content.