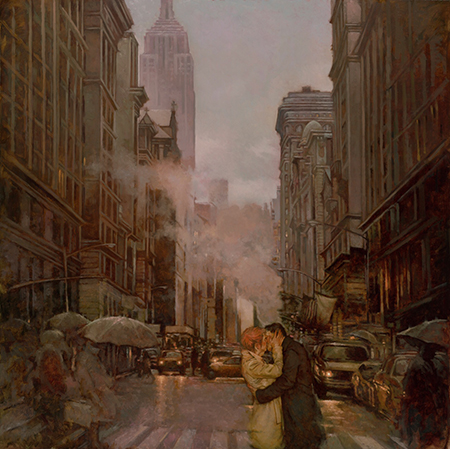 With an assured sense of figurative painting’s narrative power, Joseph Lorusso produces tightly focused, modern-day set pieces in subdued reds, browns and golds. The scenes evoke intimacy and warmth, along with a dash of mystery. At times the scenes seem theatrical, but they are nonetheless alluring and freshly realized. In “Similar Thoughts,” the contemplative poses of the two female subjects have a quality of verisimilitude, and Lorusso lets areas of mottled peach-tone brushstrokes take up almost the entire right half of the painting, as if it is a repository of those thoughts. In “The Gossips,” Lorusso presents two women in cloistered conversation, and the women’s mannerisms, the dangling cigarette and the nearly empty wine glass seem so naturally composed that the viewer has a fear of missing out on whatever the women are discussing. The depiction of women is Lorusso’s strong suit, and the show includes several works measuring about 10-inches-square that offer close-ups of women’s faces, capturing them in various moods.

“Lovers in a Dangerous Time” capitalizes on Lorusso’s additional skills in urban landscapes. Here, the tall buildings along a busy, big-city street seem to press in on an embracing couple, who are seizing the moment to kiss even though they are in a crosswalk. The “danger” could be the traffic, the mysteries of the relationship itself or the larger context of the historical moment. Lorusso cites masters of figurative painting from the turn of the 20th century among his influences, and it’s evident he knows how to give the genre a 21st-century vibe.