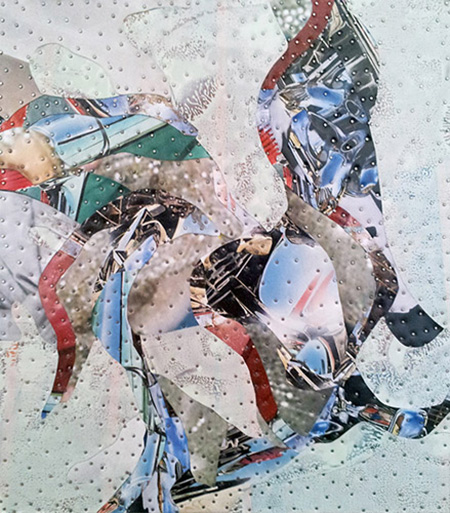 Tony Berlant is a master at collaging together snippets of tin into two- and three-dimensional art. Influenced early on by Rauschenberg’s combines and Cornell’s boxes, he began working with tin when a market near his Venice, CA studio was torn down. He scavenged metal signs in various states of decay and initially exhibited them as unaltered found objects. It was only later he began cutting the colored and printed tin into various shapes before arranging them and nailing them onto plywood with brads (thin nails) that add texture to the surface imagery. “The manual repetitiveness of what I do is satisfying,” he said in a 2009 interview at LA Louver Gallery. “I enjoy the physical activity.” Eventually, Berlant stopped using found metal and began shooting and printing his own photographs on tin, giving him greater control over the results.

Here there are 15 pieces dating from 2010 to 2015, three of which are the small houses that are a Berlant signature. Many of the flat works have a central element, sometimes suggesting a pinwheel and sometimes a bird. In “Fly Away,” it’s a bird created from tin printed with snippets of turquoise water, blue skies and white beaches. In “Cycle” a rotating pinwheel executed in pale pastels gives it an ethereal quality. “Good to Go” is similar but with a more complex design involving brighter, more intense colors and patterns. “Freefall” is delicate and lovely as it falls, leaving a trail of dissipating smoke in its wake. Other pieces such as the large “Cascade” portray foliage and flowers that resemble the brilliantly red anthurium, suggesting a tropical environment. Berlant continues to do remarkable things with a difficult medium, fusing abstract and realist imagery to which he adds a touch of surrealism.