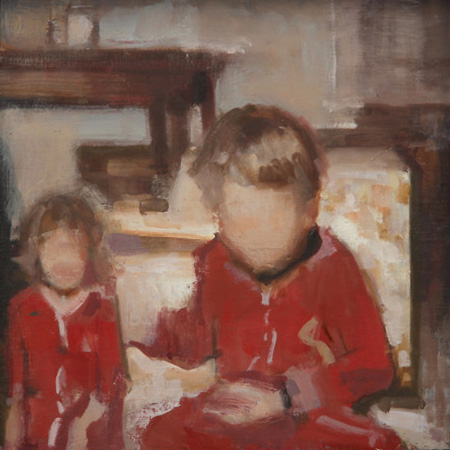 Gage Opdenbrouw’s new paintings, “Garland of Hours,” are executed in subdued palettes and based on snapshots. The faces left unfinished or obscured, erasing specific identity. Historically, the faceless figures of ‘official’ religious or political art, eroded or erased, suggest the ravages of time and the vicissitudes of power (and thus representation): think of the Sphinx, mutilated by Napoleonic soldiers, or the decapitated or defaced statues of fallen rulers. In contemporary art, Manolo Valdes’ reboots of familiar portrait paintings, from the Renaissance to the mid-twentieth century, with the faces buried beneath deeply impastoed paint, or rendered as flat shape, function both satirically and lyrically, commenting on history and culture.

Opdenbrouw transposes the melancholy of old photos to the eternal present. The mysterious characters in his oils derive their specific poses, settings or clothing from photographs, but become, when integrated into his painterly world, symbols of unknowability. The mother and child in “The Window” stand before a hearth below the photo or painting of a man who seems to observe them, from the virtual space behind the glass. The parents with young daughters in their laps in “TV Party” embody, judging by their clothing, the 1950s; the quartet in “Family 1983” seems likewise both immured in a specific time, and timeless. “Fading,” a sepia-toned rendition of two women posing outside, and “Generations,” with its trio of a grandmother, mother and daughter, are meditations on memory and time. “Little Man,” “Awo” and “Birthday Presents” depict young children with similar nostalgia and pathos. Opdenbrouw’s families, their fugitive images hovering between photographic accuracy and painterly improvisation, become universal surrogates: Everyman and Everywoman, holding still for a second, peering into the camera and out to the future, fixed and transfixing.