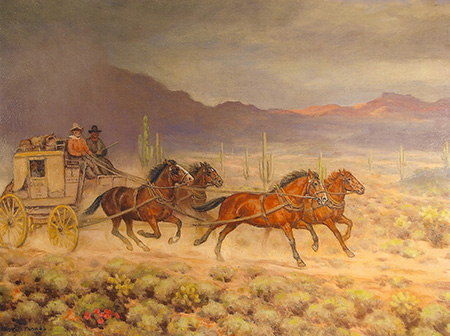 Historical accounts of Scottsdale’s development as an art destination have often overlooked a woman who in 1909 adventurously moved across the country to the Southwestern desert and became a homesteader on once-barren land. Her name was Marjorie Thomas (1885-1978), a painter trained at the Boston Museum School. In a new survey of Thomas’s work, she reverentially receives her due as Scottsdale’s first professional artist, a woman who also established its first art studio.

Her aesthetic fits comfortably into the Western genre, depicting landscapes, Native Americans and everyday pastoral life in early 20th-century Arizona. Thomas was especially fascinated by workhorses, mules and donkeys, recognizing their looming obsolescence at a time when farmers were transitioning to motorized equipment. “Indians Breaking Broncos” (1913) keenly observes the men’s strength and concentration, with equal attention paid to the horses, wildly kicking up dust under a wide-open sky. Another fine painting from about 1925 shows Phoenix’s iconic Camelback Mountain, capturing its sudden rise from the desert floor. It’s almost breathtaking to see the sandstone-and-granite mountain with only sage and saguaros in the foreground — way before the area’s massive urban development took place.

The exhibit includes archival photos and scrapbook pages from Thomas’s farming life, as well as scenic images recording her travels around Arizona with Western writer Zane Grey. Thomas led a storied life, which this exhibit helps to illuminate.