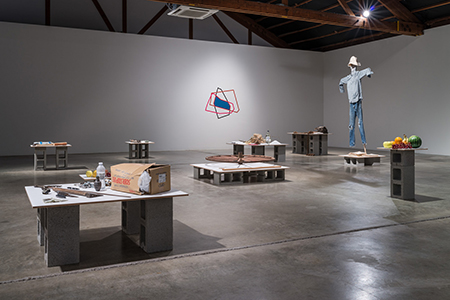 With “Structures and Feelings,” Michele Fiedler kicks off the sixth year of Disjecta’s curator-in-residence series. Based in Mexico City, Fiedler aims to integrate a roster of international artists with Northwest-based practitioners in the four exhibitions she’s programming here — beginning with the current show. Adriana Lara, also based in Mexico City, contributes wonkily diminutive vinyl wall drawings that do little to activate the gallery’s massive exhibition space. More satisfying is her multimedia installation, “Live (Wild, Animal, Disco, Deviant),” an immersive phantasmagoria of computer graphics and thumping dance music that takes the viewer on a magic-carpet ride into the software that creates pop songs.

Meanwhile, Portland-based art duo Anna Gray + Ryan Wilson Paulsen recreate the portable objects catalogued in Marx and Engels’ "Communist Manifesto.” These objects, positioned on plywood-and-cinder-block platforms, include everything from dead birds, rocks and twigs, to chains, a knife and a handful of dollar bills and quarters. Despite their prolifigacy, these accumulations feel arbitrary and wan. As a curator, Fiedler probes the nature of pop culture and communications systems. It will be interesting to see whether her next three exhibitions exploit the spectacle inherent in our media-saturated era or point to a new way of interacting with — perhaps even disengaging from? — this glut.