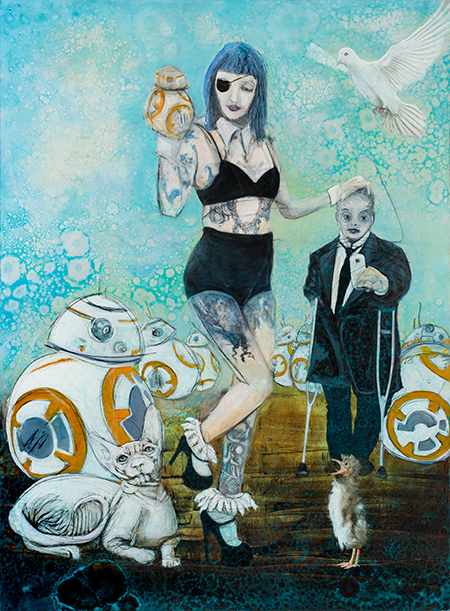 In “Two Artists Collaborate,” Sam Roloff and Shawn Webber wrestle with their individual identities while also confronting one another. The painters, longtime friends and alumni of the San Francisco Art Institute, worked on the same canvases and panels over a year’s time in a self-consciously lowbrow style and incorporating imagery from current events and popular culture. The Dakota Access Pipeline appears in “Range Wars,” while “Syria” harrowingly addresses the civil war in that nation, with imagery of warplanes, refugees, buildings in rubble, and a spectral figure brandishing a machine gun. The air of gravitas is lightened by the absurdist appearance of “Star Wars” droid BB-8, Superman and tattooed female figures wearing gas masks. (A third collaborator, Joe Lichnovsky, painted the tattoo filigree.)

Roloff — who has a condition called diastrophic dwarfism, walks with crutches, and frequently appears on the TLC series “Little People, Big World” — envisions himself as a trained circus elephant in “Ganesh Cubed,” resigned to a life in a cage In the same painting Webber portrays himself as an elephant roaming free — but also hunted and endangered — in the wild. It’s a poignant and revealing passage: two old friends, nearly a quarter-century after graduating art school together, facing down their limitations and time itself, even as they blaze forward with fresh marks.