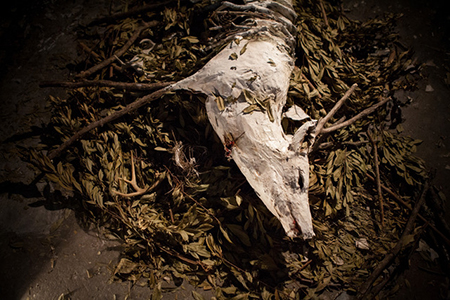 Rachel Schwind Gardner’s show reflects her deep connection with nature. Although she lives and works in Houston, her affinity is with wild creatures such as deer, wolves and ravens. The title of the show is “Prey," and these pieces address the cycles of life: birth, death and rebirth. Three vignettes comprise the installation, each one involving wolves and their prey. In “Encounter,” four life-sized wolves stalk a large deer, preparing to move in for the kill. The deer has branches for legs and antlers, while the body is constructed from wire, plaster, papier mâché, resin and paint. Gardner’s creative process begins with a foray into the woods to find just the right branches. “I allow them to speak to me,” she says. “It’s an organic, meditative process.” She also collects leaves, branches, moss and pine cones to create the settings.

“Ceremony” dominates the center of the gallery. Three wolves and five ravens surround a slain deer presented on a bed of moss like an offering, a sacrifice by the deer so that the wolves and the raven can survive. The title refers to rituals such as marriages, funerals and other events that trigger emotions ranging from exultation to mourning. The circular composition also references the symbiotic relationship between the raven and the wolf. The raven flies overhead to locate the prey and leads the wolves to it. They kill and devour the deer while the ravens wait for the scraps. In the third vignette, “Reception,” five deer hang from the ceiling, while three wolves surround them. These deer also sacrificed their lives so that the cycles of life can continue. The artist’s interest in life cycles was inspired by similar cycles in her personal life. “It was natural for me to want to express those feelings though my creatures,” she says.

Gardner’s expressive creatures are expertly crafted, and their body language reflects their various roles. The deer in “Encounter” has a sweet, docile face, oblivious to the wolf stalking it. The wolves are ferocious, their eyes black holes in angular faces. The ravens are frightening as they circle the corpse, their black feathers glistening. The artist considers herself to be a painter, and there is a painterly feel to these sculptures. The white wolves look as though they could have been formed with thick strokes of paint. With her unique creative process, Gardner conveys the vitality and transformational power of nature, as well as the magic and mystery of the wild. Her work provides a respite from an increasingly technological world cut off from nature and too often bereft of emotional connections and responses.