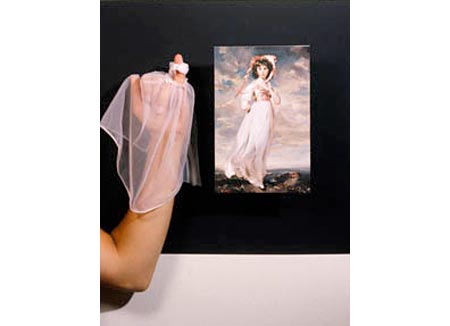 Making humor the central point of an exhibition can be a recipe for failure.  It was long since observed that there is nothing duller than an analysis of what makes something funny. "Don't Make Me Laugh" thankfully forgoes the high minded approach in favor of searching for the laughter catalyzed by the art. Among the 16 artists the flavors are varied from the dry (Erika Rothenberg) to the slapstick (Mahara Sinclaire), from the zany played straight (Jeffrey Vallance) to the straight zinger (Doug Harvey). Walter Askin and the late Walter Gabrielson built careers using humor (often with a satirical or bitter edge) as an aesthetic pillar. If others such as Pierre Picot and Richard Pettibone have had their moments, as curated into this show, hitting our funnybone is clearly not their mission. If Masami Teraoka engaged in good natured cultural satire early in is career, the work included here goes back decades because he long since assumed a very different tone. And William Wegman teamed with his Weimar hounds to create some of contemporary art's most successful stand-up - so much so that it crossed over into the mainstream culture. It's been hard to tell if, ever since, Wegman has exploited his good fortune or done his level best to run away from it. Probably a bit of each. Aside from the range of fun, this show is a nice blend of obvious candidates and some inclusions coming out of left field. The laughs are here, but try to keep your eyes open for something more to come away with more. Chances are you'll find it.