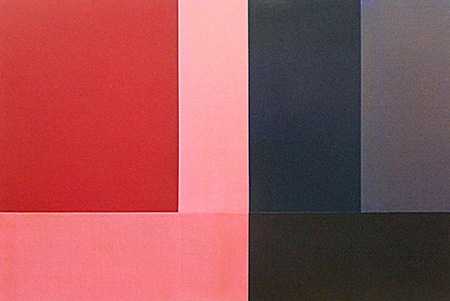 A tightly curated show pairs two local veterans of geometric abstraction, William Lane and Marsia Alexander-Clarke, whose exacting work has not received the attention it deserves. Alexander-Clarke, now in her late seventies, started making videos in the early '90s, initially gaining attention for installations that featured close-ups of the faces of women speaking about their experience of illness or immigration, the latter a subject that must have resonated with Alexander-Clarke's own recollection of moving to the U.S. from Chile as a teenager. Today, her work is almost wholly abstract, consisting of large rectangular color fields punctuated by thin vertical and horizontal stripes of variegated color easily mistaken (when seen as stills) for bands of watercolor. The stripes are actually cropped sections of video footage of the play of light on vegetation. When seen on monitors or projected on the wall, they appear as bands of flowing color. The artist constructs her videos by shifting between various configurations of grounds and bands, starting with relatively simple arrangements and building up toward more complex ones. Viewers who detect musical analogies will find confirmation in Alexander-Clarke frequently resorting to musical terms to describe her work. She describes “Buscando,” one of the works in the show that is part of a multichannel display, as "a solo/duet piece [that] expands into choral form." The shifting patterns are accompanied by a minimalist soundtrack of chanting voices.

Lane's contribution is a suite of paintings executed over the last six years. In the 11 small to medium-size works in the show, he carefully and with startling results explores the potential of color juxtaposition to create intensities and rhythms that exceed the sum of the parts and that rivet one's attention by their seemingly effortless combination of exuberance and poise. The colors and divisions in these paintings underwent lengthy adjustment, with Lane taking advantage of the revisions to give shimmer and depth to otherwise flat areas of color.