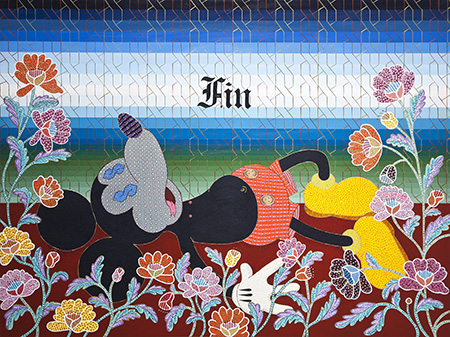 "How to Read El Pato Pascual: Disney’s Latin America and Latin America’s Disney" is an engaging group exhibition curated by Los Angeles-based artists Jesse Lerner and Rubén Ortiz-Torres. The exhibition examines the relationship between cartoon-based imagery in the United States and Latin America and the myriad ways artists have interpreted and abused Disney-like characters. Beginning from the premise that "for over seventy-five years, the Walt Disney Company has continuously looked to Mexico, the Caribbean, and Central and South America for content, narratives, and characters, beginning with Donald Duck’s first role in the Mexican-themed 'Don Donald' (1937)," the curators then use ideas raised by Chilean scholars Ariel Dorfman and Armand Mattelart in the book "Para leer al Pato Donald (How to Read Donald Duck)" to challenge the notion of a passive acceptance of all things Disney. Among the many works on view are installations, paintings, photographs and videos in which the artists use Disney characters to explore global power struggles. Included are pieces by Arturo Herrera, Enrique Chagoya, Liliana Porter, Carlos Amorales and Rivane Neuenschwander, whose character and textless comic strips speak directly to the content of the exhibition.