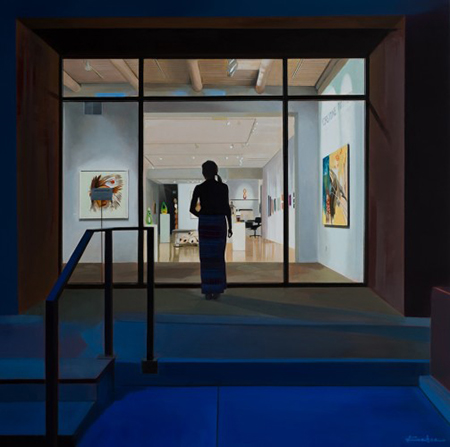 Utah artist Kevin Kehoe taps into a universal experience for anyone traveling the West’s vast stretches of highways at night: the lights created by human intervention become a respite from the tidal wave of darkness. His “Western Night, Western Light” series follows in the footsteps of nocturne paintings, paying attention to realistic detail without sacrificing the ability of such paintings to mirror dreamlike states. To that end, Kehoe will fill a canvas, “Santa Fe Back Alley,” with an adobe structure that turns mystically rosy when lit only by a doorway lantern. In “Bungalow” an isolated home glows invitingly beneath a roofline of Christmas lights, with just enough illumination to turn the snow in the foreground violet. In other scenes, Kehoe infuses night views of a tattoo parlor, a hotdog stand and a laundromat — all bathed in neon — with unexpected pathos.

The character of certain Western way stations doesn’t escape Kehoe. “Wigwam” depicts the landmark Wigwam Motel in Holbrook, Arizona, so named for the decor of its accommodations. But the focus of the painting is the beckoning portico lights that intensify the scene’s details, the eye being especially drawn to the turquoise of the classic car parked under the “Vacancy” sign. Departing a bit from Kehoe’s typical subject matter is “The Window,” in which a female silhouette peers into an art gallery that’s closed for the night. The paintings and sculptures are visible but ultimately unknowable. Human figures are usually secondary elements in Kehoe’s compositions when present at all. It makes sense for an artist fascinated by what the night can reveal.