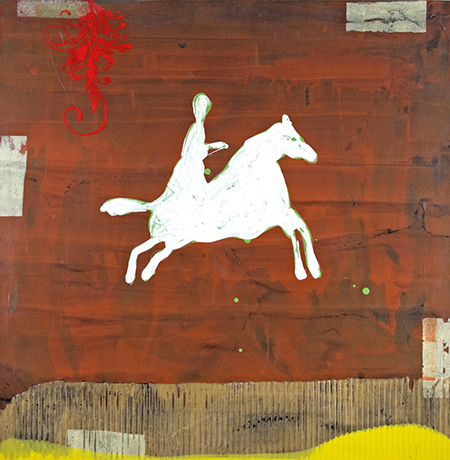 John Randall Nelson has an idiosyncratic way of inserting folk art-style animals, objects and people into his paintings and sculptures, while borrowing from the playfulness of the Pattern and Decoration movement. His trademarks — rabbits, figures doing headstands, snippets of text, glyphs, rows of polka dots and the like — are recognizable in numerous public art pieces around Phoenix, and he has exhibited both locally and nationally. Whimsical and primitive might be the go-to descriptors of his work, but an exhibition title like “Signs & Ciphers” suggests that Nelson strives for an underlying heartbeat of social commentary — one that viewers must decode for themselves.

The highly layered mixed media panel “She Made a Break for It” presents a woman on horseback appearing to jump over a “fence,” a strip of corrugated cardboard. Red, feminine tendrils lurk in the upper left corner, prompting thoughts of women breaking free of stereotypes. The subject becomes a white jackrabbit in “He Made a Break for It,” the lower half of which is corrugated metal. Nelson lets a bit of white paint drip from the rabbit to the “fence,” a signal of injury or the clash between man and nature. The show is replete with Nelson’s trademark “totems,” painted sticks that curve slightly as they reach for the ceiling. Scrawls of handwriting, quarter-size holes, found-metal bases and contrasting colors give each totem its own personality. And names like “Yeaaargh!” and “Rang Dang Dingity” reassure us that Nelson mediates his deeper messages with a sense of mischief.