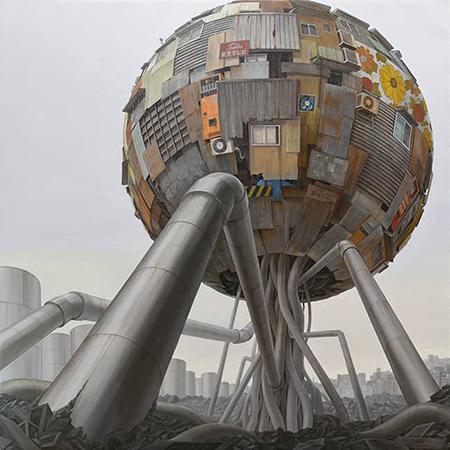 Mysterious and intricate, Masakatsu Sashie’s paintings of mysterious orbs are grab bags of technology and beauty. Like puzzle pieces for the viewer to decipher, the subjects read as both self-contained worlds of manmade objects, and dwellings suspended over an over-industrialized, failing planet. The works are rich with sci-fi elements, futuristic yet relatable, and magnificent even as they feel like warnings against environmental catastrophe. Speaking through a translator, the Kanazawa, Japan-based artist says he is depicting “landscapes from the past and the future.”

Vonn Sumner’s work serves as a complement to Sashie’s. It is also full of contrasts, and morphs a humorous approach to the figure and the genre of portraiture with an underlying sense of danger. Referencing both art history and pop culture, Sumner’s depictions of primarily men are detailed and evocative. While past works have focused on costumed characters with faces concealed, here the head coverings are in some cases removed, allowing us an intimate look at faces. Asked what the stocking cap covered characters mean to him, Sumner leaves it to the viewer’s imagination, noting “For me it evolved over time, they eventually came to represent a kind of parallel world.” Worlds within worlds — the works of both Sashie and Sumner are provocative narratives that the viewer is compelled to co-create.