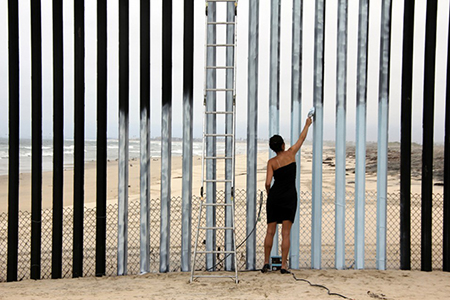 Organized and curated by Alessandra Moctezuma, “UnDocumenta" includes the work of six artists who wrestle with issues of immigration and the border, biculturalism, migration, labor issues and human rights. Expressing themselves through video, photography, sculpture, social engagement, performance and interactivity, the work of these contemporary Mexican, Latino and American artists from both Tijuana and San Diego provides fertile ground for important conversations that beg to be had in a geographic area where shifting cultural identities and nationalities are at the forefront of challenging social and political debate.

Omar Pimienta’s "Welcome to Colonia Libertad" is a participatory work that replicates the bureaucratic practice of acquiring passports. Pimienta sets up ‘mobile consulates’ where he exchanges a visitor’s expired passport and trades it for an artistic faux passport together with their new photograph and fingerprints, giving them access to his Tijuana neighborhood of Colonia Liberdad. In "365 Days in an Immigrant’s Shirt” Teresita de la Torres pays homage to undocumented migrants by wearing a plaid shirt every day for a year — a shirt she acquired while volunteering for an organization that leaves jugs of drinking water in the desert for migrants trying to cross the border. Her process is documented in photographs and a sketchbook from her daily postings.

Claudia Cano uses public performance by dressing up as a house-keeper/cleaning lady named Rosa Hernandez. Clad in a pink maid’s uniform, apron and wig, Cano sweeps public spaces such as a park, museum and adjacent to the border wall, demonstrating through photographs her invisibility to oblivious onlookers. This conveys the importance of immigrant workers to the American economy. Ana Teresa Fernandez’s video projection "Borrando la Frontera" has the artist in a cocktail dress and high heels, climbing ladders as she attempts to paint the border fence in Playa de Tijuana a light powder blue that creates the illusion of a disappearing border fence.

Dominic Paul Miller created a trans-border community partnership with Tijuana’s labor rights group Ollin Calli. Using grant funds, Miller paid workers from Mexican maquiladoras to collaborate with him on his art project — a social engagement between factory labor and production, the result being a series individual drawings. There is also a wall in the gallery where Miller documents the backgrounds of his Mexican participants, revealing the personal identity of his collaborators. Marcos Ramirez Erre installs a site specific piece by erecting a metal façade on the outside of the museum that mimicks the border fence.