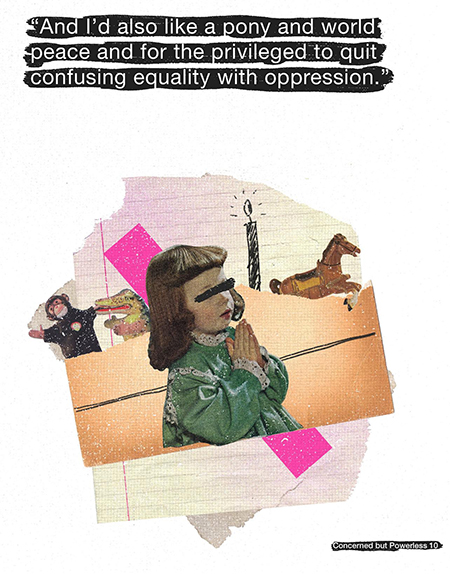 Safwat Saleem, "Concerned by Powerless #10," mixed media on board. Courtesy of Vision Gallery

Humor is essential to the mix whenever artists imbue their work with social commentary in troubled times. Safwat Saleem chimes in by creating cleanly designed montages of vintage magazine imagery and handwritten text, where benign cut-outs clash with droll comments on such issues as immigration, race and class, ubiquitous social media, climate change and, of course, politics. The artist’s statement for his show, titled “Concerned but Powerless,” explains that the montages were intended to help him process the 2016 election cycle. He hadn’t planned on continuing the theme, but “over time, the series has become increasingly desperate.”

Saleem’s background as a Pakistani-American informs the series, and explains the Urdu calligraphy that overlays many of the montages. In “Concerned but Powerless #9” he combines a black-and-white Bufferin aspirin ad — a man clutches his forehead — with the yellowed fragment of a Congressional roll call sheet. The text above it reads: “ ‘But is there a pill for bigotry and ignorance?’ he asked the doctor — quickly adding, ‘Asking for a friend.’ ’’ The added Urdu characters translate to mean in English “ignorance.” In “Concerned by Powerless #3” a vintage scene of a contemplative woman in a chair accompanies text in which she wonders if there’s a “bright side” to a “post-facts society.” The calligraphy in the corner stands for “reality.” Getting the message across without many words is also accomplished in the gingham-bedecked housewife making muffins, her eyes blacked out, who we meet in “Concerned by Powerless #12 (silent screams).” With satire in full force, the series proves to be as therapeutic for the viewer as it must have been for the artist.