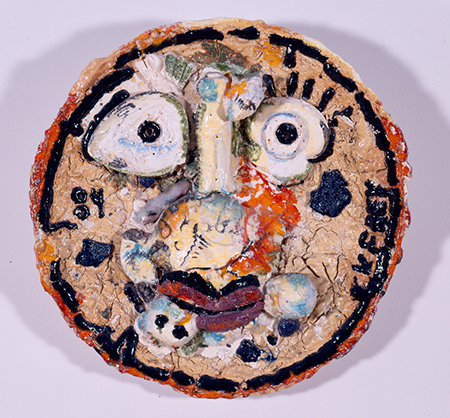 The 14 artworks that comprise Viola Frey’s “Funk” exhibit produce what feels like an intimate encounter with one of the 20th century’s foremost ceramic artists. Offerings range from substantial plates hung on gallery walls to massive figures reclining on the floor, concisely revealing the diverse ways Frey (1933-2004) played with form, color, texture and imagery. The exhibit highlights her embrace of ceramics as a means of capturing human foibles on the individual, social and cultural levels. But it also highlights key elements of the funk art movement centered in California’s Bay Area during the ‘60s, such as humor and non-conformity. “Pitcher” (1963), a functional object with brown glaze, punctuates the ways Frey would later turn traditional ceramics on its head. The familiar functional form is imbued with Frey’s talent for assemblage honed through years of combing flea markets and collecting kitsch objects that mirror modern America’s rampant consumerism and ownership obsession. Nearby, “Artist Mind and Hands” (1977) turns our attention to the autobiographical component of her work.

The latest piece shown here is “Possessions I” (1996), which depicts characters that recur within Frey’s larger body of work. Text panels elucidate Frey’s use of symbolism, cueing us to consider size, distortion, and other aesthetic choices. With men donning business suits and women dressed in flowered frocks, issues of gender and power were a central part of her discourse during a time when nearly every social convention was being questioned. Nude figures anchor opposite corners of the gallery space: both “Reclining Red Man” (1986) and “Reclining Blue Man” (1987) were created during the height of the AIDS epidemic. Even now, these figures evoke the pathos of its monumental physical, emotional, and cultural toll.