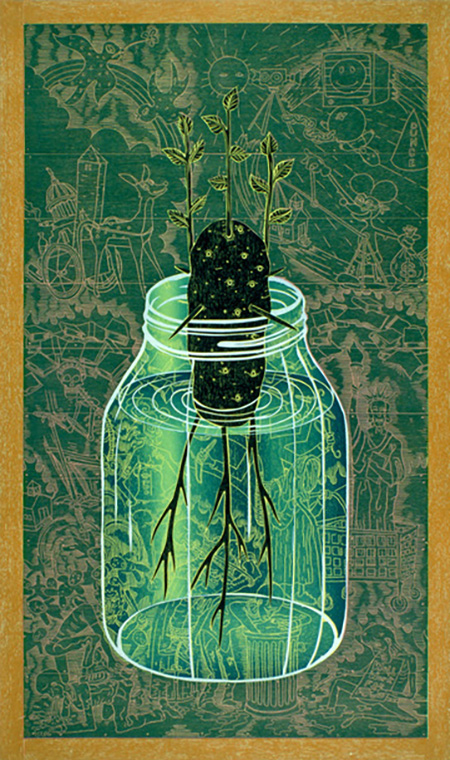 Politics and culture have long energized John Buck’s practice. Consider that in 2018 he exhibited a massive kinetic wood sculpture, “The March of Folly,” that satirized Trump and other national figures. But such ambitiously conceived woodcarving and assemblage is not the only way Buck keeps in step with the national zeitgeist. For decades, he has created woodblock prints — often large-scale — that overflow with sardonic line drawings surrounding a central image. In each work small, disjointed sociopolitical scenes vie for attention with the boldly colored foreground figure or object, whether it be the suggestion of a skyscraper, a jaguar, an eagle, a figure arising from Cyrillic-like forms, or a blazing stack of newspapers. The latter image is one of the most compelling images in this 21-print survey. The focal point of the 48 inch high “The Times” (1991) is a campfire in yellow, orange and blue, with several rolled newspapers splayed under it. But that’s just one point of entry into Buck’s enigmatic “tapestry,” here featuring denuded trees, death images and geometric forms. The mesmerizing “Argosy” (1998) depicts a greenish potato growing roots in a glass jar, complemented by a busy background that includes Bambi pulling a cart carrying the Washington monument and the Capitol dome.

Given the unusually large size and infusion of details into each woodblock, Buck’s concern for the quality of the resulting prints is consistent. Since 1983, he has worked closely with master printer Bud Shark of Shark’s Ink in Lyons, Colorado, renowned in his own right for collaborations with Betty Woodman, Hung Liu, Red Grooms and many others. Thanks to the in-person collaboration between Buck and Shark, the prints excel for their color saturation and the near-perfection of each line. The show is as much a testament to the high-stakes relationship between artist and printmaker as it is to Buck’s iconography-laden compositions.