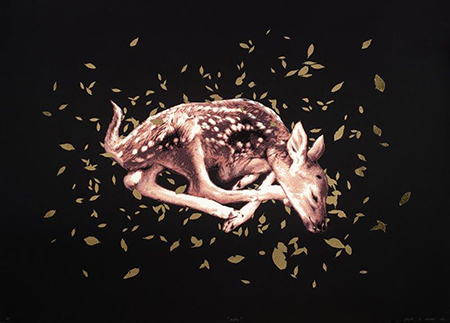 The word, “quietus,” defined as the release from life or having a calming or soothing effect, might seem an unusual title for an art exhibition. Yet the term is appropriate for this contemplative show of prints imbued with anthropomorphic subject matter. Gerges is inspired in his printmaking techniques by past masters Rembrandt, Goya, and Käthe Kollwitz. The subject matter here is animals, including deer, pigs, cows and birds, all stand-ins for humanity. By employing animals to illustrate survival, vulnerability, loss and death, Gerges metaphorically expresses our own uneasy journeys through life, made poignant knowing that these prints followed the breakup of his marriage and the subsequent passing of his father. The sanctity and healing powers of sleep, and of sleep’s transition to the dying process, are the sobering theme of the show.

The signature image is “Baby Birds” (2012), two small birds on the ground that have crashed to their death. This etching, with finely detailed depictions of feathers and beaks, was executed shortly after being informed about his divorce. His discovery of the birds, he explains, exacerbated the dismay he was feeling. “The Princess Doe” (2014) rests elegantly on its side. By creating it as a diptych, the artist expresses in metaphor the confusion we often feel. The contrasting serigraph “Requiem” (2017), of two small deer resting alongside each other in a bed of grass and pink flowers, conveys the harmony of soul mates at peace with themselves and each other. “The Kiss” (2018) is an empathic depiction of one pig lovingly holding another with its snout. The despairing “Deserted” (2013) focuses on a solitary pig lying in a vacant landscape.

Rounding out this exhibition are a self-portrait of the very introspective artist and portraits of his two brooding daughters. These compassionate pieces help convey a comment that Gerges made recently: “I think it’s a gift when art can create connections with human emotions and interactions.”