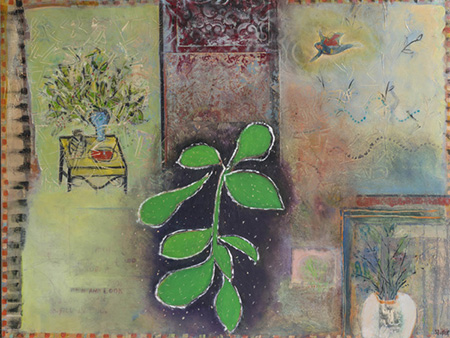 Inez Storer’s new exhibition, “Trip-Wire,” features thirty mixed-media paintings that allude to our crisis-riddled times while still succeeding as satisfying aesthetic objects that portray dream-like, non-narrative states of consciousness. A trip-wire is, of course, the trigger to set off a bomb or trap. Storer uses the term in a slightly different sense: as an obstacle that makes us stumble (trip), but not to the point of falling: ”That is HOPE and SURVIVAL!” We should be so lucky in real life.

The paintings are, despite the obstacles the artist places in their way during the creative process, a spontaneous deep dive into materials and intuition, with each work a journey without a planned destination. Their protagonists are in a sense surrogates for the artist, whose life story contains a number of dramatic journeys and surprises. Storer: “The figures have a tendency to be slightly off balance, or passing from one reality to another ... There is oftentimes an attempt at an unrealized form of danger, close, in fact, to the real world. ... an emotional, sometimes physical precariousness.” Also: “My figures often float in precarious positions like tightrope walkers, reflect[ing] our own sometimes unsettled lives.”

Storer considers herself “a visual raconteur,” but the tales she weaves through free association are as much generated in the mind of the observer-collaborator as inscribed and fixed in paint and collage. They’re fluid and dreamlike, partly scrapbook or child’s toy. The box assemblages “Salute” and “Cinema” inevitably recall Joseph Cornell — and partly the inner movie screen world of nostalgia and reverie. Don’t miss “Painting with Matisse,” a luxuriant homage to color and pattern; “A Voyage to Remember,” with its ocean liner a metaphor for life’s passage; “Saving Lotusland,” perhaps a reminiscence of Storer’s Hollywood childhood, as well a plea for the imagination. These paintings may often be thematically timeless, but they are also all too timely.