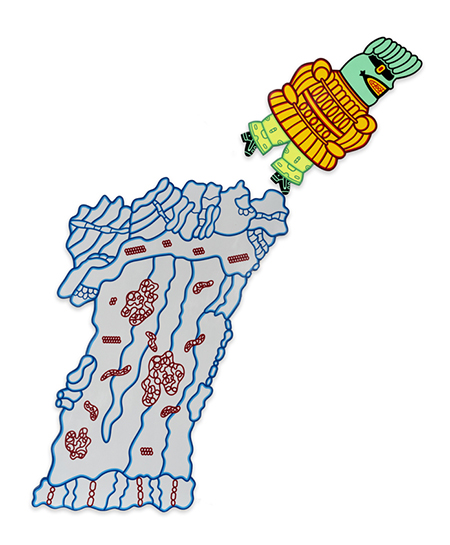 There’s a film about Karl Wirsum playing in a narrow back room adjacent to the action in the main exhibition space. It features Wirsum as a young man in 1971 answering questions about his life, his interests and his process. He tours the filmmakers through his studio, which is filled to the brim with collected stuff: bawdy tchotchkes, children’s toys from decades past, nudie calendars, decorative novelties, stockpiles of vintage clothes. From such a mass of visual stimuli, Wirsum has spent decades cultivating his graphic, superflat contribution to Chicago’s figurative art canon. The 80-year-old affiliate of The Hairy Who displays as much edge now as he had during the Imagist’s heyday.

As is his wont, each of Wirsum’s acrylic-on-panel works is assigned a smart but screwy title. In “Sigh Clip Pity Clops” a one-eyed, big-eared figure wears a question mark on his chest that underlines his own strangeness. “Points De Leon on the Point of a Boulder Discovers a Way to Never Get Older” features shaped, cut-out panel pieces of a man in decadent garb tipping off the precipice of a cliff. Wirsum’s pieces are both jocular and dark, but of the eight works here, the four cut-outs are the most potent. All figure and no ground, they are the visual manifestation of a pun: knowing, precise and perfectly absurd.