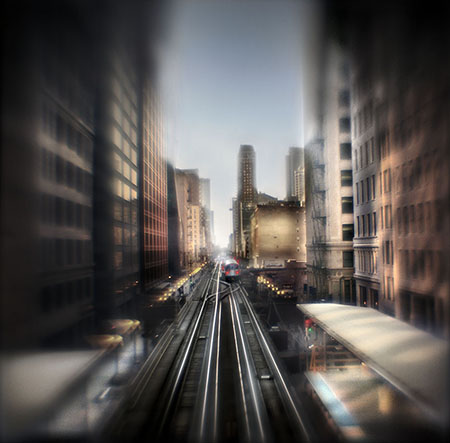 Golden Gate Bridge, Brooklyn Bridge, Central Park, the Manhattan skyline, Chinatown, Harlem, a ribbon of highway winding toward a distant mesa — Susan Burnstine’s photographs evoke dreamlike memories of travel both real and imagined. Still, this is not travel photography. Her approach is something of an anomaly. Though referencing the pictorialism of the late 19th and early 20th centuries, Burnstine’s work is not manipulated like that of the pictorialists, who often combined photographs or used darkroom techniques to make their photographs more painterly.

Burnstine understood the visual effects she was seeking even before she figured out how to achieve them. She wanted her photographs to reflect her dreams. From the age of 4, she was plagued by nightmares and night terrors, and to help her cope, her mother suggested she try to draw her dreams. At the age of 8, she picked up a toy camera and began shooting. Later, when that could no longer accomplish what she desired, such as capture images both very close and in the distance, she began creating her own cameras using vintage camera parts and random household objects, including single-element lenses molded from plastic and rubber. She simultaneously began studying photography, filmmaking, literature and psychology.

Like Burnstine’s dreams, the results from her 23 handmade cameras are unpredictable, both fascinating and challenging. She creates her images completely in camera without any post-processing or digital manipulations. The primitive cameras allow her to capture distorted images similar to those she sees in her dreams. They are mysterious and ghostly, like something glimpsed before disappearing from view. What’s new about the current show, however, is that she has introduced color into her work. Its effect is to add fragility and poetry, which evoke feelings of nostalgia and longing in the viewer.

Burnstine is based in Los Angeles, originally from Chicago, and loves New York City, so she usually shoots in one of those cities or on the roads that run between them. She explains that “These nostalgic cities and landscapes have little to do with the actual place they represent. The essence of every image is about searching for roots in unchartered lands …” Burnstine here produces images that express deeply personal feelings about memories and loss, saying, “The past remains with us, if only in shadows.”