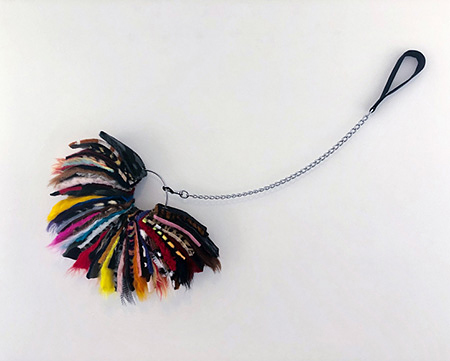 For more than thirty years Lynn Aldrich has employed meticulous craftsmanship to transform common consumer materials into metaphoric artworks that reflect what she views as the “excess, spectacle and artificiality” of Los Angeles culture. Guided by her calculated thought process, she adeptly reconfigures things purchased mostly at home improvement stores to muse humorously, and at times profoundly on our relationship to the environment. In this survey, several of the newer works on view address climate change and its threat to survival. “Cloudburst” (2016) and “Reverse the Rain” (2019) are tree shaped structures made of vinyl hoses and inverted drainpipes respectively, with trunks topped by crowns that seem to dance vigorously. Their darker meaning is suggested by the titles and the positioning of the open mouths and spouts of the hoses and pipes, which point in multiple directions ready to spew water everywhere. The end of the world as we know it is also implied in “Pet Rescue for the Anthropocene” (2017) where mass extinction of animals is alluded to by both the title and an array of fake fur samples attached to a leash. It’s also a hilarious send-up of Giacomo Balla’s futurist “Dog on a Leash.”

In a selection of late 1980s diptychs, Aldrich cleverly juxtaposes painted appropriations of art historical depictions of nature with fragments of mass-produced consumer items that simulate trees, rocks, or water using industrial or manufactured materials. In “Evergreen (Fragment after Casper David Friedrich)” (1987) a painted falling tree appropriated from the great Romantic’s “Rocky Landscape in the Elbe Sandstone Mountains” (1822) is joined with vinyl upholstery shaped like the right half of a Christmas tree. This is more than a polemic of how trees are vanishing due to deforestation to satisfy consumers, but it does get us to think about it. Aldrich’s Christmas tree is a shining slapstick example of a living tree’s demise.

Given the seriousness of the issues addressed, the tone and use of materials are consistently playful and ironic. Additionally, Aldrich provides an escape hatch in the form of “Hermitage” (2019), a towering telescope-shaped column made from Sonotubes (molds for concrete) that can be entered through a small door so as to be experienced from within. Inspired by James Turrell’s skyspaces, which are designed to be high tech meditative retreats, inside “Hermitage” (the title alluding to the selfsame retreat) we can sit on carpeted flooring and gaze upward towards a lighting fixture to see overlapping rings of color and light, created though the low tech magic of plastics and electricity. It’s magical no less than Turrell’s version, but Aldrich delights in giving away the trick.