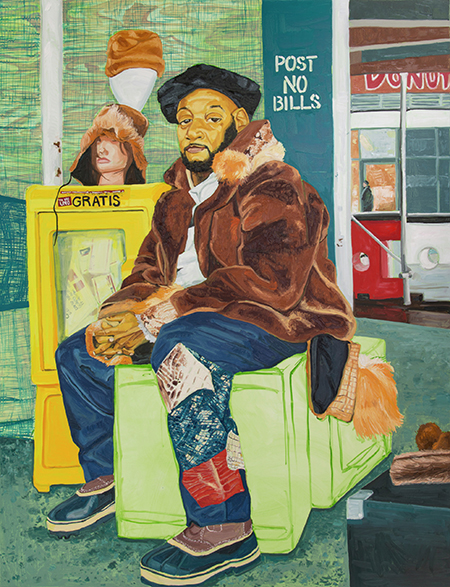 Born and raised in Denver and now working in Harlem, Jordan Casteel is on an upward trajectory, one that is validated by this home town survey of about 30 of her portraits, street scenes and early studies. “Returning the Gaze” is Casteel’s first solo museum exhibition. The most striking aspect of Casteel’s work is how it manages to be understated and extravagant at the same time. The portraits are understated in their subject matter: “Fatima” (2018) depicts a Muslim woman posing in front of her food truck. An African American street vendor, “Charles” (2016) is surrounded by his wares. Several paintings are based on photographs she takes during walks around her Harlem neighborhood, during which she politely strikes up conversations with strangers. It’s a tactic that breaks down barriers, enabling subjects to “return the gaze” in a mutually respectful way. It’s non-confrontational approach turns out to be a disarming experience for us as well. Casteel, who cites Alice Neel as a key influence, succeeds with compositions that engage everyday occurrences and ordinary people without hyperbole. The realism is more pointed because of it.

Just as important, Casteel’s works are extravagant, beginning with their larger-than-life scale. “Yvonne and James” (2017, 90 by 78 inches), for instance, which depicts an older couple on a bench, their gnarled hands interlocked. Also commanding attention is Casteel’s lavish handling of color and light, especially in nude portraits for which friends volunteered to pose. In “Galen 1” (2014), Casteel boldly incorporates green into the African American subject’s skin tones, and she makes it work. Galen sits relaxed in a kitchen, where the scene contrasts a black-and-white checkerboard floor against reflections on the metal appliances. Another nude, “Yahya” (2014), casts the reclining subject in a beatific light that turns his skin golden. Empathetic portraits such as these earn their spotlight in an increasingly inclusive and diverse art world environment. This exhibition succeeds in both respects.