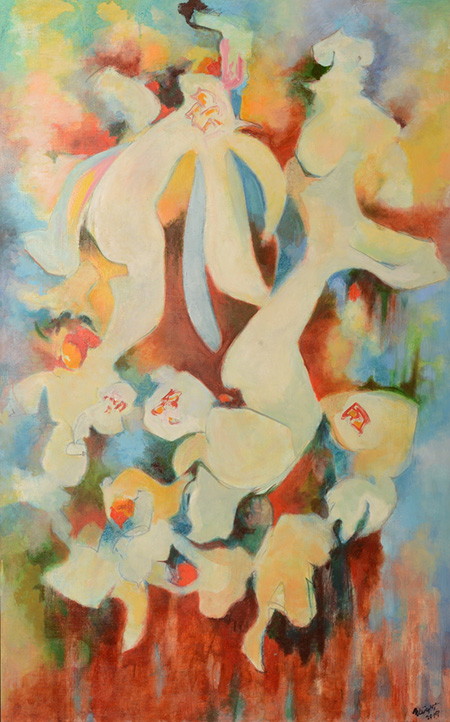 Born and raised in New York state, Michael Wright worked early in his career as a studio assistant to Willem de Kooning before moving to New Mexico in the mid-1980s. He said of the effect of the Southwestern landscape on his work, “the light and clarity of New Mexico inspired new directions in my art.” All of the paintings here were created during his time in the Southwest, and while they are not literal or even abstracted landscapes, the influence of the color, line and form of New Mexico is evident. Large-scale works like “Juicy Fruit” combine a tangled mass of forms in a wide range of colors. Through careful draftsmanship and a focus on the balance of colors, what might well have been bombastic and chaotic feels pleasant and calming. “Pepe Trails I” is another wonderful example of landscape’s influence on Wright’s work. Both balanced and chaotic, like nature itself, the painting is a dichotomy of sharp angles and soft curves. Small explosions of dark paint blend into softer, sand colored tans and whites.

“Bait Fish” and “Feeding Frenzy” are also derived from nature, but in a much different way than either “Juicy Fruit” or “Pepe Trails I.” Influenced by their titles, they evoke swirling schools of colorful fish, and while there are so many orchestrated elements, with especially broad use of color and movement, they are harmonious and tranquil. “Bird of Prey” and “Dancing Figures” are built on strong figurative elements, but form and color are as expertly executed as in the landscape-based images. Wright’s paintings urge us to appreciate the natural world, not for its complete forms, but in all of its elements.