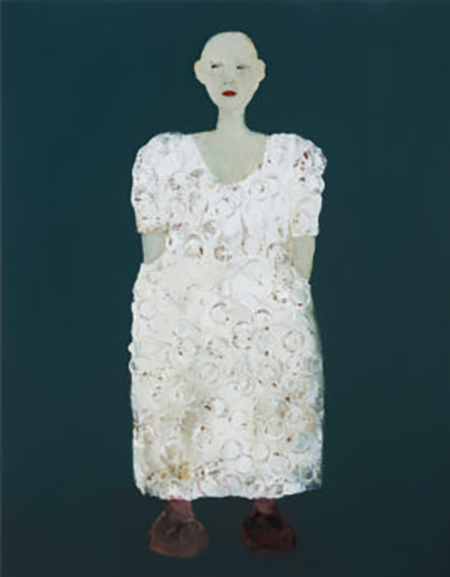 The advantage of Marianne Kolb’s enigmatic solitary female figures lies in their ambiguity. But this risks becoming a disadvantage as the art world comes to favor more specific historical, gender-related and social meaning. Now 61, the self-taught Swiss-born artist has long been the subject of acclaim. These twelve new paintings of adolescent girls and children affirm the artist’s debt to Nathan Oliveira and Manuel Neri: individual crises are very much on view. But in Kolb foregoes any tell-tale details of their plight. Each picture has a different colored solid background which alternately gleams or burns with color. Two of the children, “Carmen” and “Hope,” are bare-headed but fully dressed in filmy frocks with puffed shoulders. The teenage girls are all painted in gorgeously stylish dresses. With their blunt shaved heads and fancy frocks, “Nadia,” “Maya & Asha,” “Daria” and “Olivia” were “horizontal collaborators,” the derogatory appellation assigned to slutty Frenchwomen who, during the World War II occupation, were known for their profitable relationships with German soldiers. Like all the figures in the “Unyielding” series, arms and hands are resolutely stuffed into dress pockets or behind their backs. Such stances are stubborn and spoiled at the same time.

While the late Peter Selz and other notable Bay Area critics tied her to Northern European Expressionism, it’s hard to see any of that left in the current work. There is no emotional thrust or darker cues present, other than messy brushwork that, at two feet-square, carries an intimate scale of remembrance, souvenirs and portraiture. The larger works, averaging a still modest five by four feet, are more commanding but beckon deeper historical context.