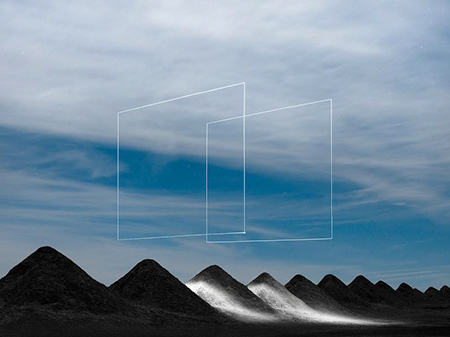 The basis of Reuben Wu’s archival pigment prints is traditional and expertly executed landscape photography. The location of his subjects is unimportant, other than that they can be found on earth. But borders, place names and coordinates are absent, highlighting the awesomeness of earth’s geography. The scenes of his richly colored and dramatic landscapes are impressive and awe-inspiring rock formations and serene bodies of water, though this is hardly original as far that that goes. What makes Wu’s photographs distinctive is his use of light carrying drones. Wu coordinates the drones to leave light traces in geometric forms around the landscape, a simple neon colored circle hovering over a body of water (“AE 0396 - Nimbus”) and encircling the peaks of rock formations (“LN 0309”), or large squares or triangles floating in the sky above mountains (“AE 1460”).

These forms seem otherworldly, like traces of UFOs or signals sent from neighboring galaxies. They likewise mimic the simple geometric forms of ancient petroglyphs. The clean shapes and lines create a contrast with the roughness of the landscape. The light from the drones also casts an eerie illumination on the earth below, almost as if the shapes bring the earth to life. It feels like the illumination comes from within the billion-year-old rock formations themselves. As the artist puts it, he is creating a “zero trace version of land art.” Wu expands upon conceptual traditions of land artists like Robert Smithson and Michael Heizer, though without physically touching or altering the earth. This technique, like the work itself, illuminates the magnitude of the past which created these stunning landscapes, while recognizing our ever-changing relationship to them.