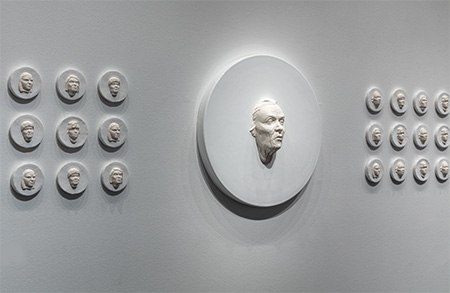 Gina Adams’ visceral, multilayered and prolific mixed media works reflect an artist coming to terms with the harm done to her ancestors. The Vancouver-based Adams is of Ojibwa, Lakota and European descent. Through extensive research she unearthed data, archival documents and photos regarding her family, but also of indigenous peoples at large. A brilliant outcome of this research is her ongoing “Broken Treaty Quilts” series, which consists of hand-cut calico letters sewn on both sides of antique quilts. Each quilt reproduces portions of 19th-century U.S.-tribal treaties. “It’s honor is hereby pledged” is a recurring phrase in those treaties. The combination of patterned fabric letters and the intricacy of the quilts renders the text almost indecipherable. Like the broken treaties the quilts are based on, the language is often obfuscated. Ten quilts are hung from the ceiling, close together but with enough space to walk among them.

Three other installations — equally stunning in their execution — help Adams drive home her points about forced migration from Native lands, the threats to tribal culture and traditions, and other unfortunate byproducts of Manifest Destiny. In “Honoring the Unidentified: Historical Photographs of Chiefs Wearing Peace Treaty Medals” Adams blurs archival portraits of tribal elders with an encaustic layer, signifying the men’s marginalization in white society. Another installation superimposes undulating red lines on an oversized black-and-white landscape photo to indicate how U.S. rail movement westward overtook Native territory. “Ancestor Medallions” is an array of more than 100 porcelain busts in imitation of the bronze medallions that American presidents once bestowed upon tribal chiefs. Various Native American faces, and in a few cases Adams’ own ancestors, grace the white-on-white medallions, replacing the presidents’ faces. It’s a satisfying reverse appropriation of a supposed goodwill token. Altogether, the installations elicit the long, slow reckoning with U.S. treatment of indigenous peoples — a stain on history that the artist feels deeply and, more importantly, enables us to fee las well.