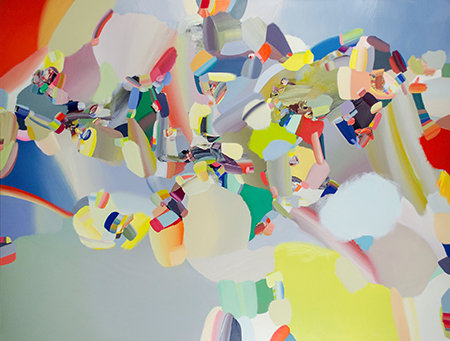 There is musicality in Trey Egan’s abstractions, even though it might appear incongruous to describe his work in terms of sound. The fact is, Egan is indebted to sound, especially the electronic dubstep music by which he often paints. Melodies and tonal mood thoroughly inform his canvases, as can be seen in the vibrant dashes and strokes of foreground and background colors. Practically floating on the surface are intermittent stripes, amorphous shapes, and cloud-like forms, all arranged as if they were laid down according to a certain rhythm in his head. Egan has synesthesia, which enables him to stimulate two senses — in his case, sight and sound — in tandem. The paintings offer a multifaceted encounter, sometimes dreamlike or summoning memories, but for the most part uplifting in nature.

One of the most intriguing features of Egan’s work is the way he loads several colors on a brush or palette knife and lets the variegated streaks and slivers remain. In addition, he experiments with redactive and additive processes, using various tools to scrape away paint or to mound it for a hyper-textural effect. His practice includes painting one layer at a time, sometimes with long breaks in between. It’s not unlike musical layering of instrumentation. “Take These Dreams” lets the shapes sweep from the upper left corner to the lower right, altogether suggesting how the eye should flow and how the various elements might join to become less haphazardly arranged than they are at first glance. In several eye-catching works, Egan texturizes isolated areas with blobs of paint, some so thick that the edges curl. “Float and Imagine” creates its mood with a more minimalist palette, letting orange, red, blue and yellow spurts of paint swirl atop a gauzy ivory background. For Egan, the merging of audio and visual stimuli into experiential works serves as a balm to a world verging on sensory overload.