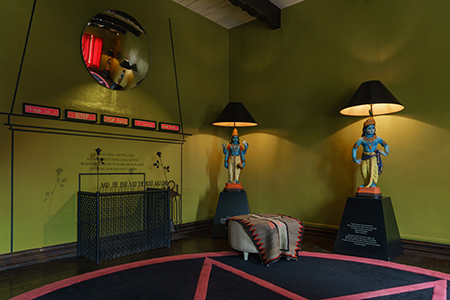 For those well-acquainted with the L.A. art scene of the 1990s, the name John Boskovich may prompt intriguing recollections of a poetically clever practitioner out of CalArts; for anyone else, it’s likely to be more of a Pacific-Standard-Time dig into a the legacy of an otherwise-unknown artist from 20+ years ago (the artist died in 2006). With “Psycho Salon” gallerist Scott Cameron Weaver dives into Boskovich’s archive, presenting not just an array of his work but also a partial re-creation of Boskostudio (his former L.A. home and studio), including olive-green walls, a 13-foot-diameter red-and-black pentagram rug, an iron fireplace screen lettered with T.S. Eliot text, and a convex security mirror. Yes, it’s over-the-top; but his home was even more so.

Boskovich’s oeuvre incorporated poetry, homoeroticism and the dogma of 12-Step/self-help into a text-and-photo aesthetic that, 20-odd years on, struggles to transcend the era of its making (the olive-green walls don’t help, but kudos for being faithful to Boskostudio). In addition to a trio of “Hare Krishna Lamps,” a “Psycho Salon” highlight is “One Day at a Time,” a fluorescent-red-painted Shiva sculpture atop a white Formica pedestal which credits Alcoholics Anonymous and bears the T.S. Eliot quote: “But the torment of others remains an experience Unqualified, unworn by subsequent attrition. People change, and smile: but the agony abides. Time the destroyer is time the preserver.” Perhaps more effectively to the point, and also part of the “Psycho Salon,” are several “Color Correction Series/AA Bumper Stickers,” white-on-fluorescent-pink oil-painted panels. “Powerlessness (After Ryman)” is a vertical sequence of ten of them cascading from white-on-white to full-contrast with pink. But Boskovich’s most touching avatar comes in the form of a not-quite-half-full plastic honey bear, smeared from use (especially under the chin), atop a wood stand in a Plexiglas case. Experienced in the right light (here, it competes with an installation of empty honey bear bottles lit purple from UV lights installed around the office), it taps into a vain of vulnerability that elsewhere tends to be over-mediated through its appropriated imagery. The piece is from ’93, and one wonders if there’s a connection between Boskvich’s work assuming a progressively cooler, conceptual sensibility and his other career as a filmmaker author of screenplays.

A testament to Boskovich’s most moving invention goes back even earlier, to 1989. A “Self-Portrait” features a copper engraving with illustrations of three whales and a porpoise (all oddly floating on land) with the artist’s phone number stenciled into the middle. To the left of the engraving is a JFK half-dollar with the artist’s social security number stamped across its center. To the engraving’s right reads the line, “Nevertheless the men rowed hard to bring it to the land; but they could not: for the sea wrought, and was tempestuous against them,” a King James version of Jonah 1:13. According to Weaver, only one person called Boskovich’s number, which, despite spending his career surrounded by people, seems to be a more reliable representation of his inner life.