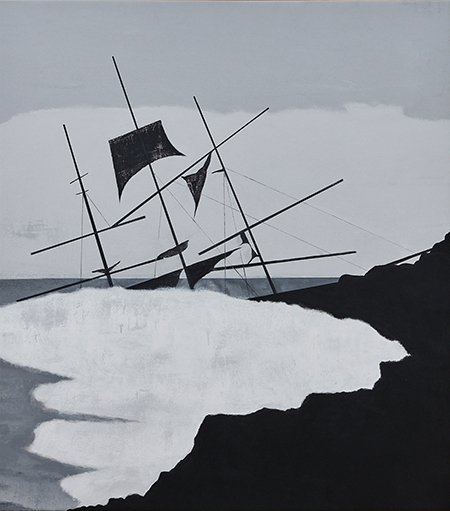 Christopher Mir’s images are intriguing and mysterious narratives. A schooner with tattered sails lies shipwrecked on a snowy shore. A family of four is seen traversing an ambiguous landscape. Rays fan out from behind a violet hill. Disembodied arms are silhouetted against a black ground anchored by blue stripes. Mir derives his distinctive archetypal vocabulary from photographs, magazines, online images and other sources. He breaks down a source image, manipulates and constructs it into a collage to achieve his desired effect and final state. They consistently arrive at a tone that is evocative, enigmatic and haunting.

“Wolf Mother” is based on the bronze “Capitoline Wolf” in Rome’s Musei Capitolini. The mythical she-wolf suckling the founders of Rome, Romulus and Remus, is one of the most recognizable icons of the ancient world. Mir depicts only the front half of the wolf and one of the twins. Likewise, “Pyramid,” which hangs next to “Wolf Mother,” conjures images of ancient Egyptian pyramids in Cairo, although here the pyramid is green and floats on a black background. Other distinctive elements in Mir’s paintings include fire, an all-seeing eye, a ghost ship and a three-leaf clover. They are transformed so as to elevate the mundane to the ideal. Though his painting style is clearly restrained and the images understated, the resultant effect is powerful. A grid of 12 small paintings on the end wall of the gallery convey a commanding presence. With their simplification and flatness, Mir’s paintings initially feel naïve, but the compositions are structured and executed with a sophisticated eye. Mir’s restricted palette — most paintings are executed in two or three colors or black and white — is very much a part of this. Mir combines elements of abstraction, figuration and narrative in these appropriated and manipulated images. Utilizing art historical references, mythology, nature and more, these idiosyncratic paintings both stir the imagination and stimulate the intellect.