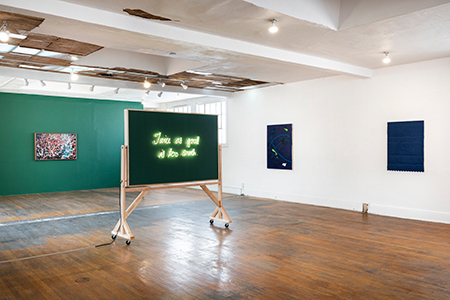 E.J. Hill, installation view of "Twice as Good is Too Much," 2019/20, at Commonwealth and Council

Apart from the chalkboard on wheels at the center of the gallery — one side a green acrylic mirror, the other a green chalkboard with a white neon light proclaiming “Twice As Good Is Too Much” — and a single photograph, this is a painting show. That would be unremarkable, were it not for the fact that we’re talking about EJ Hill, who blew away most of the field in last year’s “Made in L.A.” with an installation featuring a mini-running track, photos of his durational running performances, and Hill himself atop a winner’s podium, unmoving as a statue, throughout the Hammer Museum’s daily hours over the 78-day run of the show. Hill won the “Public Recognition Award” for his monumental efforts, as voted by Made in L.A. visitors.

This is clearly a very tough act to follow, and it wouldn’t be out of line to anticipate something at least vaguely in the performative realm. In addition to the chalkboard, the other more overtly conceptual work here is a framed colored photo, directly across from the mirrored side of the chalkboard, that features a post-graduation gathering: red-cap-and-gown graduates congregate on an expanse of black-topped basketball courts with their friends and family. The scene, as shot from about a third-floor window level, is flush with the unspectacular: rather than an abundance of smiles, exuberance and celebration, the vibe reads more like: “OK, what’s next?” Meanwhile, Hill’s paintings, a series of about 10 medium-sized panels on the opposite side of the chalkboard are solid in their own right but hard not to be taken as opportunistic. It is not exactly the most logical evolution of his work. The paintings bear references to, and ephemera from the classroom. Off the work here, Hill has a complex relationship with it. There is college-ruled paper (both in crumpled and spitball forms), ‘classroom border’ paneling, to a brand of ridged, decorative bordering called Bordette (chewed gum is also a frequently used material, though it’s mostly invisible), perhaps a reference to their typical placement under desks.

The strongest among the paintings, “Chutes,” is an abstraction of just a few curved lines, wide and thin, with a few notches and an outline of a map-like shape in green, yellow, white and red pastel on a dark acrylic background. By contrast, “Composition 3 (gold star)” is a star-like constellation of spitballs and a lone gold star that’s easy to miss in the bottom right corner. It’s this latter piece, such as it is, that circles back directly to Hill’s conceptual conceit of “Twice as Good is Too Much,” an interpretation of the sentiment that African Americans have to be twice as good to get half as much as whites. It’s a supposition that puts a (white) critic of the work on eggshells, and yet it must be said that these paintings, particularly on the heels of the “Made in L.A.” performance, aren’t the most optimal vehicle for that exploration.